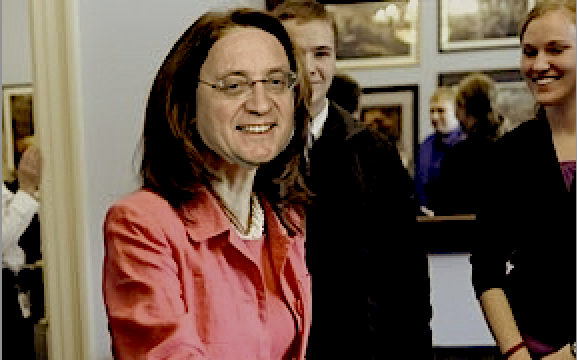 I’m sure she’s a lovely woman. To someone.

But I have to be brutally honest with you, Save Jerseyans: Michele Bachmann is starting to make my head EXPLODE. And not in a good way!

Although I guess I should’ve known better. Your Blogger-in-Chief rarely takes in political shows past a certain hour for sanity preservation reasons. Nevertheless, I broke my own rule on Monday evening over a late meal and turned on the Fox News Channel. Coincidentally, Rep. Bachmann was Bill O’Reilly’s featured guest in the “No Spin Zone.” They discussed her presidential campaign which, if you haven’t noticed, isn’t going too well post-Iowa.

Throughout the segment, O’Reilly gave Rep. Bachmann plenty of opportunities to sound something less than shrill and, if I may say so, a little desperate. She didn’t take him up on it, choosing instead to stubbornly hammer away at the alleged “differences” between her anti-Obamacare stance and the rest of the GOP candidates’ respective approaches. At one point during that particular line of questioning, Rep. Bachmann lambasted former Massachusetts Governor Mitt Romney’s pledge to issue an executive order immediately upon taking office as entirely insufficient and unacceptable. She prefers legislative action.

The problem with Bachmann’s criticism? It’s completely inaccurate! Mitt Romney would give every state a waiver on “Day One” of his presidency to stop the bleeding. On Day Two, he’d lean on Congress to take that sucker to pieces as Bachmann also promises to do. Mitt Romney’s issue page isn’t exactly ambiguous on the topic:

Mitt Romney believes that Obamacare must be repealed. On his first day in office, he will issue an executive order paving the way for waivers from Obamacare for all 50 states. Subsequently, he will call on Congress to fully repeal Obamacare, and advocate reforms that return power to the states, improve access by slowing health care cost increases, and make health insurance portable and flexible for today’s economy.”

Is Bachmann just confused? Did she bother to read up on Mitt’s position? Or is she actually ideologically opposed to an executive order preceding legislative action under any circumstances? If so, following that logic to its natural conclusion, an emergency room doctor shouldn’t dress a gun shot victim’s wounds or offer any painkillers prior to surgery. I hope we can agree that that is a crazy way to practice medicine AND govern a country! Waiting on Congress to act isn’t exactly a viable solution for businesses already suffering under the yoke of this monstrous healthcare law.

Yet somehow I don’t think Rep. Bachmann’s qualms with the Romney approach are rooted in ideology. She may be a little “creative” with the facts from time to time, Save Jerseyans, but I wholeheartedly reject any suggestion that she’s a stupid person. This is an intelligent, knowledgable, ambitious woman trying to thrash her way to the big chair after years of making a name for herself as a full-time political activist. Unfortunately, Bachmann’s ambition increasingly manifests itself as a willingness to bend a few truths, manipulate a couple facts, and perhaps even malign a few GOP colleagues along the way.

Michele Bachmann is acting like Steve Longan in a skirt, Save Jerseyans! 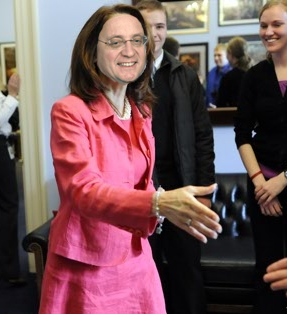 There are plenty of legitimate contrasts to expound on in Election 2012. Rick Perry’s wishy-washy illegal immigrant tuition position is a one example. Mitt Romney’s “states rights” justification for the failed Romneycare experiment is another. Both deserve scrutiny. But what I cannot abide is a Republican politician mischaracterizing other Republicans’ positions for political gain and, having done so, sowing seeds of discord where none need exist.

Such behavior closely mirrors Lonegan’s “Christie is a Rino” strategy in 2009. Unable to make hay of anything relevant and down in the polls, Lonegan went after Christie for wiretapping terrorists as U.S. Attorney and a number of other bizarre, head-scratch inducing non-issues armed with less-than-accurate facts. Of course, these divisive tactics didn’t help Lonegan on Primary Day. They rarely do. All it produced was needless division at a time when taxpayers desperately needed to unite against the liberal incumbent.

Two years later, Chris Christie is a leading contender for president without even being a real candidate. Lonegan, for his part, is doing the political equivalent of a once-formidable rock group reduced to playing high school dances. He’s largely irrelevant in his own party.

6 thoughts on “Michele Bachmann: Steve Lonegan in a Skirt?”