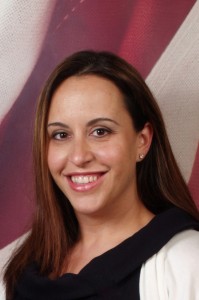 Republican Assembly candidate Marcia Silva is about to receive the some bi-partisan support in the strongest way. The Democrat Mayor of East Brunswick, David Stahl is going to take the stage this afternoon at Heavenly Farms Field with a bunch of other Ds and Rs to endorse Marcia in her fight against the status quo in the 18th legislative district.

LD18 is traditionally a democrat safety zone, however, with many becoming disillusioned with Senator Buono and her crew that she controls in the Assembly, it is no surprise that even Democrats are quickly jumping ship.

Just a bit of background on Silva: she is a former Assistant Prosecutor in Middlesex County and currently runs her own legal practice out of South River. Marcia is also a first generation American. Her parents emigrated from Portugal and Brazil, and grew a business that they started from nothing into a successful real estate operation here in New Jersey.

In addition to this new, interesting endorsement, Marcia also received the endorsement of the Lincoln Club list past summer and PENPAC today.

UPDATE: After the public endorsement was made, Mayor Stahl released the following statements:

“Simply put, I think some career politicians in Washington and Trenton just don’t get it. This election year, however, I believe there is a candidate for the Assembly who actually gets it, and that’s why I am supporting Marcia Silva for the Assembly in the 18thDistrict,” Stahl said. “Marcia has all the characteristics that we want in the people we elect to represent us.”

Mayor Stahl and Silva met with a bi-partisan group of supporters at the Heavenly Farms Fields in East Brunswick to make the announcement. At the announcement the Mayor pointed out that neither he, nor Silva are career politicians.

“I am a Democrat. Marcia is a Republican. More importantly, we are Americans; we are New Jerseyans. … This country and state continue to have many problems that affect so many of us. … I am sick and tired of picking up a newspaper and reading how party politics stops the problem solving. … The time has come for that nonsense to end – we must have real, bi-partisan solutions,” he added.

“Think about what I just said,” Stahl concluded in describing Silva,  “smart, hard working, problem solver, a good listener, trust worthy, reliable and possesses a wonderful ability to relate to and communicate with people. Those are the qualities that I, as a citizen, want in my representative in Trenton.”