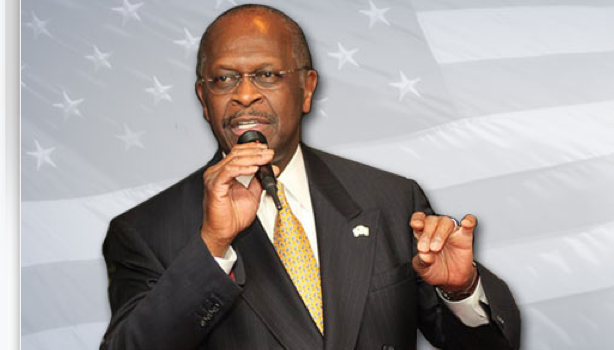 Say it ain’t so, Herman!

Herman Cain, who I’m a BIG fan of, hit the Sunday morning talk show circuit today and had harsh words for his fellow Republican candidates.

“I believe that a lot of conservatives, once they know his positions on those things you delineated, they will not be able to support him. I think that that is absolutely a liability to him, if he gets in the race.”

Cain got a little more specific when pressed:

“Most of the conservatives believe we should enforce our borders. They do not believe people should be here without documentation. They don’t not believe global warming is a crisis or a threat… Yes it might be a little bit out there, but they don’t see it as a crisis or a threat. And as you go right down the line, he’s going to turn off a lot of conservatives with those positions.”

The “green jobs” debate is one area where your Blogger-in-Chief has consistently disagreed with Governor Christie, Save Jerseyans. Going back to the 2009 Election, he’s endorsed the flawed premise that “green jobs” are good for the economy. Unfortunately this an objectively untrue assertion. Every serious study reveals how green jobs cost much more to generate than they ultimately return to the economy; some estimates suggest $50,000+ tax dollars for every new job! That’s a bad investment by any standard.

Hence, the whole concept of a profitable “green job” is rooted in science fiction. Flying cars would be cool, too, but the technology just isn’t there yet! Green jobs are no different. One day, we might be able to turn Cheerios, hair clippings and cow flatulence into gasoline. Not today. And another point: why should taxpayers subsidize expensive, hypothetical energy strategies when we have ample domestic resources of fossil fuels?

Yes, green jobs don’t make a lick of sense as a taxpayer investment. Cain is right. But Christie is no environmental radical, either. He wisely pulled us out of the Regional Greenhouse Gas Initiative (RGGI), a cap-and-trade scheme that functioned as a electricity tax. Trenton liberals threw a fit but Christie ignored them because the man believes what he believes and can’t be budged from those principles – even when they occasionally depart from conservative orthodoxy.

Later in the day, on ABC News, the coordinated media attempt to drive a Republican wedge continued when Cain was asked about the Governor’s recent appointment of an Muslim Superior Court Judge:

This particular question was beyond stupid, Save Jerseyans, because ABC’s clip was taken completely out of context. Shocking, I know. Christie never said fear OF Sharia law is crazy in of itself, nor was he endorsing Sharia law in the United States. He only said dismissing an otherwise qualified Muslim judge is crazy. I haven’t read one article alleging that this appointee has ever endorsed the application of Sharia in U.S. or state courts. If I’m wrong, then I invite a reader to correct me.

All in all, Save Jerseyans, I continue to admire Mr. Cain. His delivery is 100% better than when he first joined the race. His common sense, businessman-like approach to public policy is refreshing. Nevertheless, I would caution him to evaluate his Republican colleagues based solely on that which he knows and NOT how the “facts” are presented/interpreted/manipulated by lefty media personalities.

The result is conflict creation where none need exist.

Something another GOP hopeful, Michele Bachmann, absolutely excels at.

5 thoughts on “Cain Slams Christie: “Too Liberal” for the GOP Nomination”