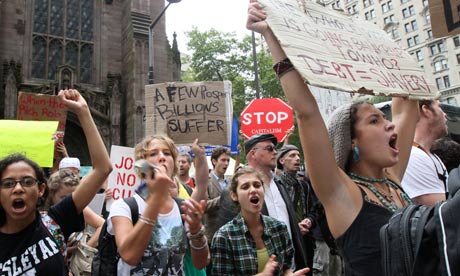 I’ll be honest with you, Save Jerseyans. When I first saw the website for the Occupy Wall Street “movement” I thought it was a parody. I was under the impression that some clever conservative blogger had taken to the internet and created a website to make the faux-testers in New York look stupid (which admittedly would not be all that difficult, they do a great job themselves).

Occupy Wall Street has an actual website and they have demands! They are truly focused on a common goal shared by all the…hundreds…of people participating. In fact, they have thirteen demands, with each demand being completely and totally insane. Whoever Lloyd Hart is (he wrote this list of demands and put his phone number at the bottom), someone should check on him and make sure that whatever asylum he escaped from gets him back.

Here are some of my favorites with some blunt commentary to follow:

Demand eleven: Immediate across the board debt forgiveness for all. Debt forgiveness of sovereign debt, commercial loans, home mortgages, home equity loans, credit card debt, student loans and personal loans now! All debt must be stricken from the “Books.” World Bank Loans to all Nations, Bank to Bank Debt and all Bonds and Margin Call Debt in the stock market including all Derivatives or Credit Default Swaps, all 65 trillion dollars of them must also be stricken from the “Books.” And I don’t mean debt that is in default, I mean all debt on the entire planet period.

This one basically calls for the collapse of the entire financial system across the world. A return to the dark ages. Something tells me (ie. Darwin) that these coddled yuppies sitting on the sidewalk with their iPads and “More Government Please” protest signs would be the first to fall in such a society. Debt is not some amorphous abstract idea, it is something that you owe to someone else for something that they did for you. These people simply want everything for nothing. I wish this was #1 on their demand list because it puts the rest of the demands in total context.

Ok, so after we pay for everyone to go to college, we should spend a trillion dollars (someone picked a random number based only on what sounded good) on building roads and bridges. I wonder how we could fund that after refusing to pay any of our debts?

Demand seven: One trillion dollars in ecological restoration planting forests, reestablishing wetlands and the natural flow of river systems and decommissioning of all of America’s nuclear power plants.

Even better! So now that everyone is educated, and we spent a trillion dollars on new infrastructure, we can now spend another trillion on breaking that infrastructure down to restore nature!

Demand nine: Open borders migration. anyone can travel anywhere to work and live.

Because we do not have an illegal immigration problem already in the United States.

Demand one: Restoration of the living wage. This demand can only be met by ending “Freetrade” by re-imposing trade tariffs on all imported goods entering the American market

More great reasoning! Let’s put up barriers to trade but not barriers to immigration and foreign labor. Not only that, but the previous demand totally defeats this one. By allowing unlimited immigration with open borders these people would be driving wages even lower than they are today. If you increase the supply of labor, you drive down the price of labor. Maybe if these people had their “free college” they would have taken economics 101.

There are more equally hilarious demands on the Occupy Wall Street website. Feel free to head on over there and read them in full if you are feeling kind of sad today and need a laugh. 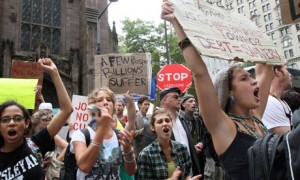