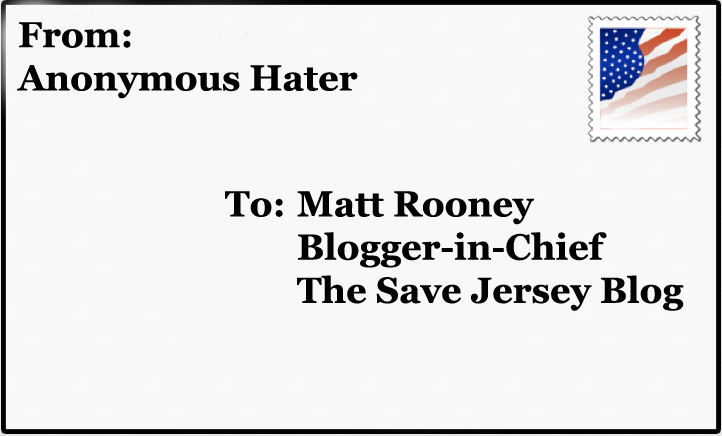 New media rockstardom comes with its perks, Save Jerseyans.

It also comes with hate mail, especially around election time when frustrated leftists get their Obama-print panties in a twist and choose to take their angst out on your glorious Blogger-in-Chief. Is it fair to me? No, of course not, but I do it for you! It’s my sacred duty.

My latest anonymous hater is angry because I believe “govment” [sic] is evil. I’m equally angry that the public education system failed him (or her) so utterly and completely but hey, the damage is done at this point! No use crying over spilled milk All we can do is adopt an understanding posture and try to help this lost soul back to the light. 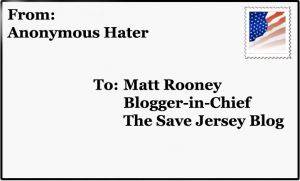 I see you are another confused white guy who thinks the big bad “govment” is the root of all evil.

No, MONEY is the root if all evil.  Gluttony (greed) is one of the seven deadly sins.

Despite the continuing lies of the faux news crowd, it isn’t regulation or taxes which negatively impact jobs.  It is greed.   Ross Perot got it right when he said the various “free trade” agreements we mistakenly signed beginning in the 1980s would result in a “giant sucking sound” of jobs being moved to third world countries?   Why?  Regulations and taxes?  He’ll no, the cost of labor.  He was right and thus the greedy are reaping what they have sown.  What “regulation” causes piggy Verizon to have call centers in other countries?  What “tax” causes Johnson and Johnson to make band aids in Brazil?

So, while you and the other confused continue to destroy the working class of this country, and lead us to inevitable social unrest, the corporatocracy remains fat and happy just like your beloved governor and his Wall Street wife.

I see a Chris Myers future for you.

Good luck!   See you at the revolution…

I’ll concede Craig that, yes, I am ‘white,’ although I don’t see what gay prostitution has to do with Ross Perot and free trade? Maybe I don’t want to know…

Allow me to cut to the heart of my anonymous detractor’s ramblings, Save Jerseyans.

Poor Craig’s email is a jumble of contradictions much like the larger “Occupy Wall Street” movement. First, he insists that high tax rates have nothing to do with outsourcing. Then he proceeds to blame high labor costs for our economic woes. Hmm. I guess it never occurred to him that the United States’s 39% corporate tax rate – the highest in the world – might contribute to the prohibitively high cost of doing business in modern America? Just a tad?

To make matters worse, American businessmen have to grapple with union-coerced legacy costs, crippling environmental regulations, a wildly progressive federal income tax structure, and skyrocketing property taxes at the state level…. oh and now, lest we forget, they’re factoring in the astronomical cost of universal healthcare mandates! Right here in our own Garden State, a decade of tax ‘n’ spend economics directly resulted in a mass exodus of wealth to less-taxed states.

It’s a ridiculously easy to understand ’cause and effect’ relationship: big government requires higher taxes, and high taxes entice businesses to relocate to places where they can find cheaper labor and, consequently, keep more of their profit rather than pay it to the government.

Or the “govment” if you prefer, Craig! Either way, your hateful rant is spirited but wildly devoid of truth.