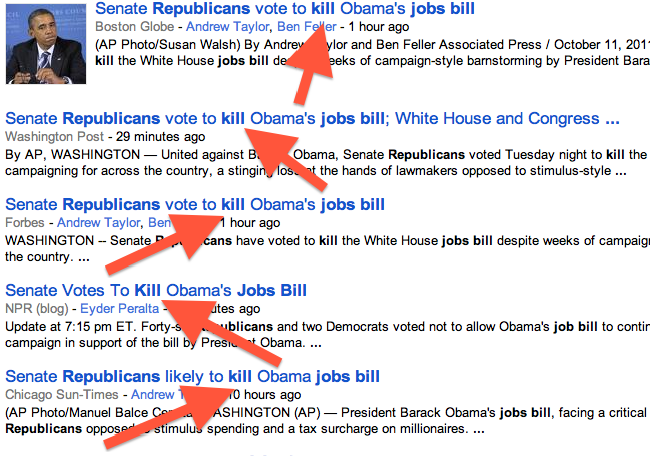 No, it doesn’t make much sense. A dog can’t kill a bird with a cat’s claws. But THAT was the headline last night from most major news agencies, Save Jerseyans, after the U.S. Senate voted down President Obama’s $447 Billion jobs bill.

Just check out the marked-up screenshot below from Google News. If you didn’t know better, and I’m afraid far too many civics-challenged folks do not, then you’d scan these headlines and assume that an evil Republican Senate just stood in the way of your unemployed uncle landing a new job.

But what the media conveniently neglected to include in its reports is how the current composition of the United States Senate includes 53 Democrats and 47 Republicans.

That’s six more Democrats than Republicans. Since Vice President Joe Biden can serve as tiebreaker, and Harry Reid has his trigger finger on the nuclear button, Republicans ordinarily can’t do anything without at least 4 Democrat votes. With a filibuster in place, the Democrats only need to pick off 7 Republicans.

This is a Democrat chamber, folks. It leans left. If the President can’t win there, then he can’t win anywhere.

The dirty little secret here is that Obama didn’t want it to pass! His plan was nothing more than a cynical ruse designed to bomb and, when it did, give the President and his media allies an excuse to accuse Republicans of inaction. He wants to campaign against a “Do-Nothing” Congress like Harry Truman. It’s the sick rescue fantasy of a failed regime, Save Jerseyans.

It’s our job to remind voters that Barack Obama’s Democrat Party still controls half of Congress after having dominated the entire Capitol Building for 4 years… 4 of the worst economic years in American history!