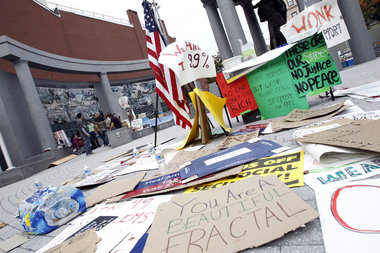 How many people do you think showed up at yesterday’s Occupy Trenton?

Well the answer my friend is – “two dozen protesters“.

That’s right, the liberal tea party movement had a whole whopping group that is less than some college classes. Maybe it’s because even New Jerseyeans realize that demonizing capitalism is an exercise in failure and silliness. They don’t even have a real message or a real plan! What, are we going to tax everyone during a double-dip recession? Are we going to FORCE companies to hire people with silly degrees like music history or women’s studies of engineering (made up but this may exist)? Of course not. Anyway I await Blue Jersey and the unions to pay some day workers and have them show up to hold signs. Because that’s not astroturfing at all.

Finally, I sure hope they respect Mother Earth, Gaia if you will, and clean up after themselves.

3 thoughts on “How You Know Occupy Wall Street = Fail”