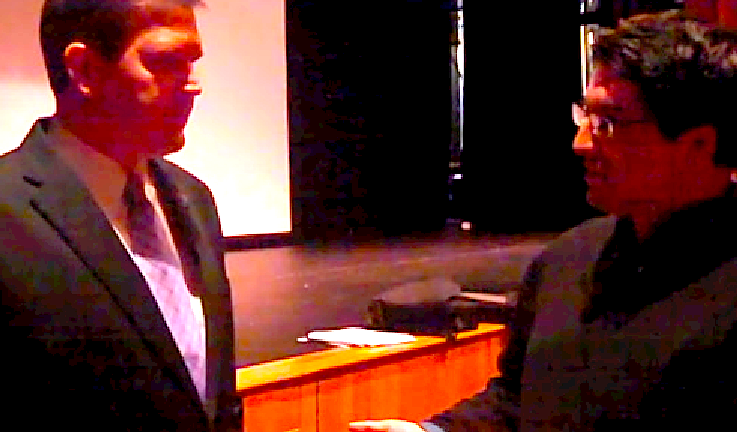 It was a cold December night in the Garden State, Save Jerseyans, but state Senator Mike Doherty (NJ-23) still managed to catalyze a hot debate in South Jersey’s Voorhees Township.

The topic? His controversial “Fair School Funding Act” reform proposal that would replace our state’s current (and almost unintelligible) formula for allocating property tax dollars to school districts. If enacted, the end result would be a flat funding amount assigned to each child regardless of geography; he estimates approximately $7.5k. Suburban municipalities like Voorhees would hypothetically save a ton. Voorhees itself would pocket an extra $18,289,126 annually. You can visit the Senator’s site to learn more about the plan and even try the calculator to ascertain how much it would save your town: http://fairschoolfunding.com/.

We caught up with him for a few moments following the town hall Q&A session to discuss his plan. My concerns? A) How do we guarantee that the “saved” monies would actually be dedicated to property tax relief? and B) Isn’t this just more redistribution? What about school choice?

I also snuck in a question near the end regarding the 2012 U.S. Senate primary…

Not every Republican caucus member is ready to champion Doherty’s plan.

Asm. Jay Webber (R-Morris), the former NJGOP chairman and a frequent interviewee here at Save Jersey, recently panned it as nothing more than a
“spending bill” on his official Facebook page:

The problem I have with the Fair School Funding Act is that it is a spending bill, not a property tax relief bill.  The act simply reallocates money from one set of school boards to another.  It contains no mandate or mechanism for guaranteeing that the extra aid to places like Montville goes directly back to taxpayers in the form of property tax relief.  Instead, from what I can tell, the Fair School Funding Act relies on school boards to voluntarily return the extra money to taxpayers, which in most communities will mean little or no tax relief, but lots more spending.

Worse, that increased spending will be baked into future school budgets, and, if the State aid to schools is cut again like it has been recently, our schools will be faced with huge cuts or appeals for even higher property taxes.  We should have an equitable distribution of school aid to suburban and rural districts that will guarantee property tax relief, and such a system almost certainly will require some form of spending cap to control costs and ensure that excess revenue is returned to the taxpayers.  As it currently exists, the Fair School Funding Act doesn’t accomplish that.”

The FSFA is certainly better than what we have now. Almost anything would be. But Webber is right: in its present form, Senator Doherty’s bill relies too heavily on school boards to voluntarily return money to taxpayers. When does that ever happen? Government bodies rarely attempt to return funds before trying to imagine new ways to spend the surplus. The Senator did, however, tell me that he’s open to amending it to include additional mechanisms towards accomplishing that end. Maybe this is the time to have that conversation?

Republicans need to put their heads together and come up with legislation that can serve as a rallying point as well as a winning campaign issue in 2013.

At the same time, I’m just happy to belong to a party where these issues are openly discussed! The Democrat Party’s “throw more money at it” strategy is cynical, tired and FAILED. Republicans are the only ones trying to innovate a way out for students and taxpayers alike. It gives me hope that we may get there one day soon.