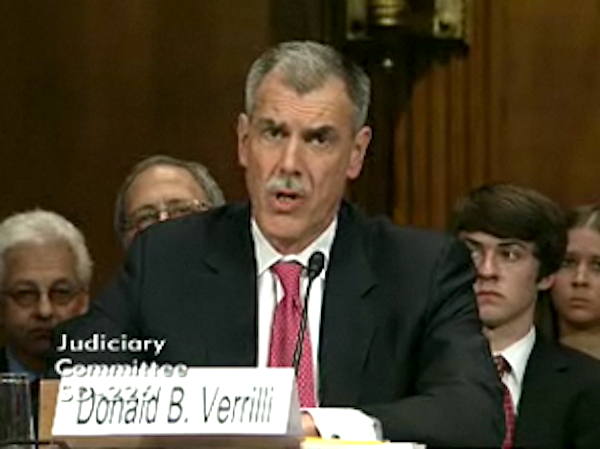 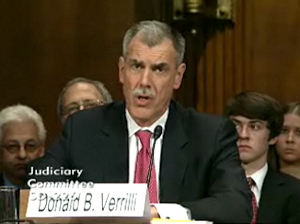 Solicitor General Donald Verrilli had a bad day yesterday, Save Jerseyans. I almost felt for him despite my complete and utter disdain for his cause (and his client, a.k.a. the Obama Administration). Almost.

The veteran litigator stumbled his way through what was likely the most momentous oral argument of our time. And as Politico reports, many Court watchers were horrified by Verrilli’s performance:

“He was passive. He was stumbling. He was nervous,” CNN legal analyst Jeffrey Toobin told POLITICO. “I was just shocked.”

His halting delivery was so pronounced that BuzzFeed mercilessly edited together 40 seconds of coughing, throat clearing and water-drinking.

“I’ve seen him argue under pressure,” said Arnold and Porter’s Lisa Blatt, a former assistant to the solicitor general who’s argued 30 cases before the Supreme Court. Blatt, who listened to audio of the argument, said, “That’s not the way he usually sounds.”

Blatt said she was primarily surprised that Verrilli “didn’t seem that excited to be up there.” Given that this is one of the biggest cases in modern history, she said, “I would think it would be a blast to be up there.”

We know why Jeffrey Toobin and his liberal ilk are upset, Save Jerseyans. Paul Clement & Co. kicked the Administration’s butt, so much so that liberal Justices Ginsburg and Breyer had to repeatedly jump in and assist the drowning Verrilli by basically making the Solicitor General’s arguments for him. Obama’s supporters in the media saw their political lives flash before their lives! It’s almost as if they could hear Romney taking the oath of office in each stammer and stutter.

But Lisa Blatt’s reaction was a little more interesting than Toobin’s. As a veteran litigator, she can only imagine how exciting it would be… a “blast,” as she imagined the experience.

As his testimony made painfully clear (click here to read the Day Two transcripts over at Heritage), Verrilli knew the Administration had a remarkably weak argument concerning the Commerce Clause. Case in point: two hours had past, and Verrilli couldn’t once concoct an answer to the seminal issue upon which this entire case will turn: What is the point of having a written constitution of enumerated powers if Congress can use the Commerce Clause to compel private citizens to purchase products from private companies?

Said another way, what CAN’T Congress do to us if the Commerce Clause grants unlimited powers to Congress? And if it can do anything, then what is the point of retaining federalism? Civil liberties? Property rights?

This is still the United States of America, folks, at least until Obama gets reelected and sells us up the river to Mother Russia. For now, trying to rationalize THAT species of anti-liberty, anti-constitution, anti-limited government ridiculousness on the world stage would make me choke, too, so I can’t rightly blame Verrilli for doing it.

At the end of the day, he’s just a lawyer trying to defend an indefensible position. He’s hardly the first and he won’t be the last from municipal court on up.