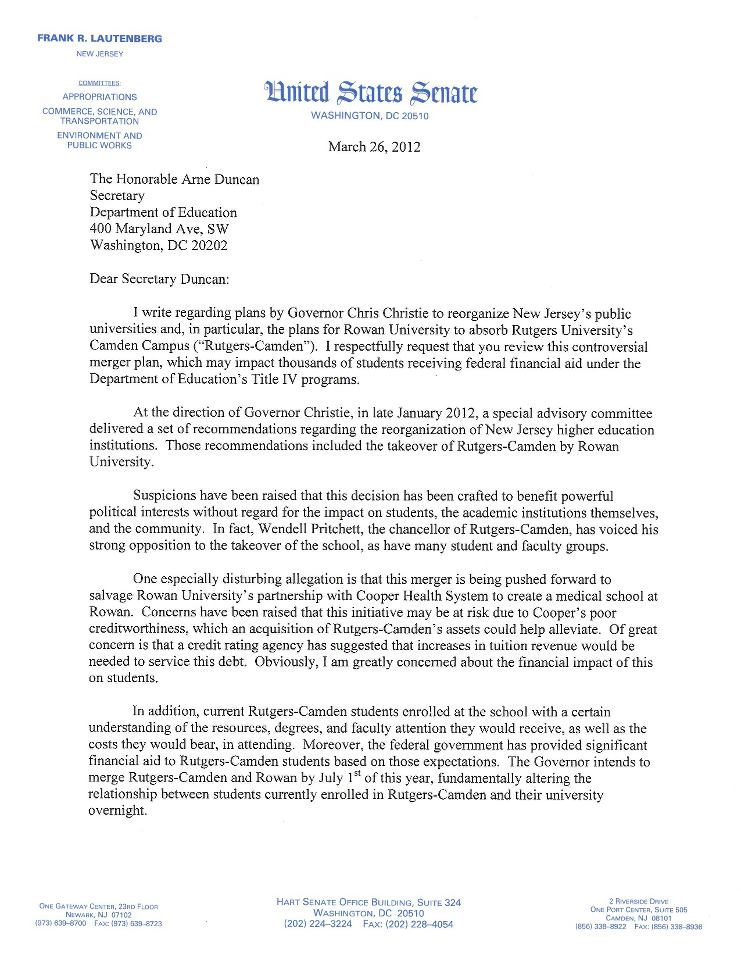 Always count on a North Jersey Democrat to try and throw the South Jersey Norcross Machine under the bus, Save Jerseyans. That is exactly what happened today, and I applaud it.

Senator Frank Lautenberg wrote a two page letter (which you can view in image form below) to Secretary of Education Arne Duncan asking that he please review the merger plan being pushed by Norcross and Governor Christie.

Lautenberg does not even attempt to be subtle in his letter. He comes right out and says it,

Suspicions have been raised that this decision has been crafted to benefit powerful political interests without regard for the impact on students, the academic institutions themselves, and the community.

Talk about hitting the nail right on the head! After reading the letter I almost feel like the Senator has been following our coverage. After criticizing the political game going on behind the scenes, he touches on the uncertainty of the plan, the lack of cost details, the odd July 1st deadline set by the Governor, the involvement of Cooper Hospital and its poor credit rating, the threat of increased tuition for Rutgers Camden students, the effects on the integrity of our higher education system , and of course, the mass opposition from pretty much everyone to the plan.

Now, I am not exactly sure what Arne Duncan could do about the takeover of Rutgers Camden. Rutgers and Rowan are both state funded institutions in New Jersey, and while I am sure they get some sort of federal money, Washington has essentially no control over the way New Jersey conducts its institutions.

That being said, I appreciate the sentiment in Lautenberg’s letter, and any attempt to shine more light on this dubious plan is good in my book. 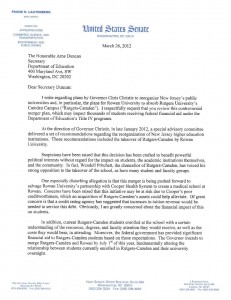 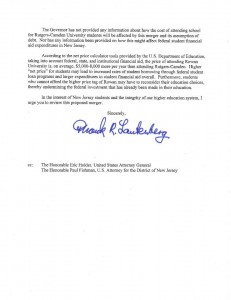 7 thoughts on “Save Rutgers: Lautenberg Asks Sec. of Education to Review Rut-Row Merger”