The dinner was attended by upwards of 65 people and featured speaker Peter Schweizer, author of Throw Them All Out, whose research into congressional and governmental corruption has inspired new legislation requiring Congressmen to disclose their financial transactions electronically every month.

Republicans may be a rarity in Hoboken and all of Hudson County for that matter but attendees were upbeat and celebratory. When asked about the history of Republican in Hoboken, Municipal Chair Diana Davis said that they started the Republicans of Hoboken four years ago and that “we were a bunch of ragtag Republicans when we started”. Two years after that, they were on County Committee and the club was the official municipal club of the Hudson County Republican Organization.

Sue Pregibon, one of the organizers of the event has been working with Ms. Davis for three years to bring interesting speakers to the club. In ’07, after local taxes skyrocketed 47%, Ms. Pregibon was galvanized into action and founded Hobokenrevolt.com, a pro-tax payer and non-partisan citizens group. Of Mayor Dawn Zimmer, who was also in attendance at the dinner, Ms. Pregibon said she was a good mayor and brought up her well known relationship with Republican Governor of New Jersey, Chris Christie. 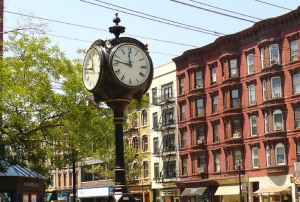 “The speaker reflects a sentiment that all Americans, regardless of party feel. The size and scope of government is too large. So much power has allowed politicians to enrich themselves at the expense of the community at large,” said James Sanford, Chair of the Hudson County Young Republicans. Mr. Sanford continued to praise the hard and good work Ms. Davis has been doing from founding the Republicans of Hoboken to continuing to work to grow Republicanism in town.

When asked about the speaker and his relevance to other challenges facing the nation, Tom Mooley who attended the event and is an avid reader of the National Review said “now more than ever it is important to work together to preserve the balance of power between the rights of the citizens and government that the founders intended”.  Sally Abdlkader, the newly installed President of the Women’s Republican Club was encouraged by the great turnout and wants to use her position “to promote women, help women, and get women elected.”

The annual Republicans of Hoboken Lincoln Day Dinner was an unmitigated success, from an amazing speaker to great leaders who are helping change Hoboken and Hudson County.