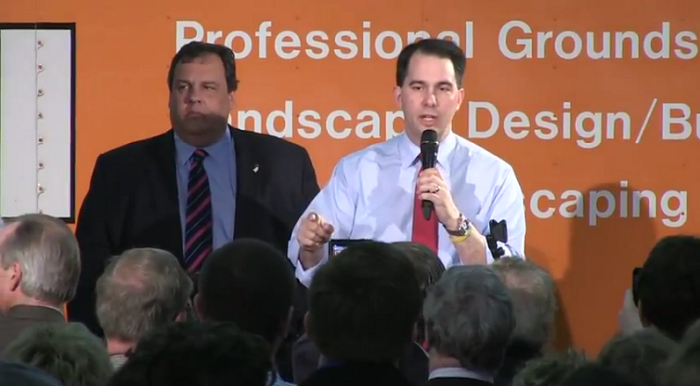 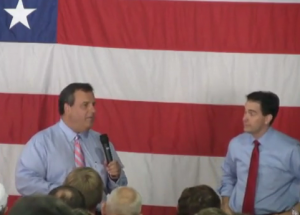 They’re well-deserved! Walker is still up by 9-points with almost 90% of precincts reporting.

I congratulate Governor Scott Walker on his impressive win tonight. I am proud to have campaigned for him and Mary Pat and I are proud to call Scott and Tonette our friends.”

Governor Christie will be a special guest on Greta van Susteren’s FOX News program this half hour… Christie campaigned extensively for Walker and clearly these rockstar GOP Governors share a spot in the vanguard in the war against Big Labor.

Tune in if you’re not too tired! I’m already doing the nod…

Another big blog for Team Obama, Save Jerseyans… 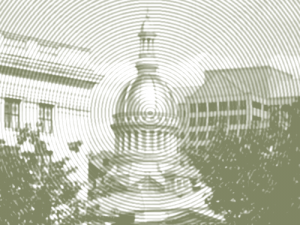 We’re ready to call NJ-9 for Democrat Bill Pascrell! He presently leads by 40-points with 319 of 424 precincts reporting district-wide after running up a HUGE 5-digit plurality in his base of Passaic County. Steve Rothman can’t make it up with what remains in Bergen County. It’s over. Fin! Rothman is surely already filling out his app for a low-level Obama Administration post. Just don’t get too comfortable, Steve. After Wisconsin tonight, it’s looking more and more possible that it would be a short term position!

NJ-9 Losers: Barack Obama (b/c David Axelrod blessed Rothman) and the Passaic GOP (b/c Pascrell is still around)

Leonard Lance is victorious in NJ-7, Save Jerseyans. He currently has 63%
of the vote to 37% for his opponent, David Larsen, with 60% reporting. Larsen had won 35.7% of the vote against Lance in 2010, so this is a marginal improvement but surely disappointing for the challenger’s backers.

FYI – NJ.com is calling NJ-10 for Donald Payne, Jr. A fitting tribute to his late father who he will succeed! Congratulations to him.

This is a historic win for Wisconsin taxpayers, Governor Christie, and EVERY single American politician willing to stand up to the Big Labor machine. It’s an equally HUGE loss for President Obama…

BCRO Chairman Bob Yudin is having an ominous night, Save Jerseyans.

Yudin faces a three-way contest to hold his chairmanship next week. It wasn’t looking good before tonight. This looks worse.

Tonight, Joe Kyrillos took the first step in becoming New Jersey’s next United States Senator and I offer my congratulations to him, his family, h:is campaign team, and all the Garden State Republicans who support his candidacy. For far too long, New Jersey has been held captive by Democrats like Senator Bob Menendez, who protect their special interest benefactors before taxpayers and who believe they are literally entitled to the public office they hold. This November, New Jersey Republicans have the opportunity to break away from that pattern and elect Joe Kyrillos – a conservative leader who will hold the line on taxes, work to cut spending, and be a voice of fiscal responsibility in Washington. In 2009, New Jersey made history by electing Governor Christie, don’t be surprised if we do it again in 2012 with Joe Kyrillos.”

These Passaic County returns say it all, Save Jerseyans…

If that trend continues, combined with low turnout in Bergen, BILL PASCRELL will triumph tonight and hand the President YET ANOTHER embarrassing loss…

Save Jersey is prepared to call the NJ-6 GOP Race for Anna Little.

Why? Check out the current Monmouth County total with over 70% of precincts reporting:

Still nothing out of Middlesex County (live results here), but Ernesto Cullari needed a big margin in Monmouth to overcome Little’s anticipated advantage in Middlesex. He didn’t get it. Now we have to pull together and try to defeat Frank Pallone…

Ernesto Cullari could be in big trouble in NJ-6, Save Jerseyans.

He’s trailing Anna Little by 16-points, 58% to 42%, with 9% reporting. He’s also losing Monmouth at the moment by an even bigger margin. Still very early, but he can’t lose Monmouth (where he has the line) and hope to make it up in Middlesex (where Anna does)…

…except for young Democrat lawyers in Wisconsin? NRO says the Dems have positioned a 400-strong attorney army in and around the Badger State. If Walker goes to a recount (God forbid) and Rothman/Pascrell do too (God please!), then the attorney labor recession may finally end by tomorrow at 9:00 a.m.

We’re waiting for results from the big races. Could take awhile given how close some of these races are expected to be. Ugh…

FYI, SOUTH Jerseyans… this won’t be a surprise to anyone, but veteran incumbent U.S. Rep. Frank LoBiondo (R, NJ-2) appears poised to cruise to victory over his 20-something challenger Mike Assad (early)with 2% reporting, 86% to 14%.

Polls will close across New Jersey in a matter of minutes. We’re over an hour away from polls closing in Wisconsin.

What do we know right now?

HUGE turnout today in Wisconsin, and exit polling shows Scott Walker (R) leading Tom Barrett (D) by 5-points. That would be enough to avoid a recall and crush the spirits of liberals, hippies and Big Labor thugs everywhere, Save Jerseyans.

Here at home, turnout was incredibly LIGHT as predicted. So light throughout Bergen County, in fact, that NJ-9 challenger (?) Steve Rothman may have trouble overtaking Bill Pascrell who reportedly did well in his traditional Passaic strongholds including Paterson and Clifton. Meanwhile, in NJ-6, turnout was exceptionally light in Middlesex. One of my Facebook friends was the 11th voter in his Middlesex municipal precinct… at 5:30 p.m.!!! Another was  31 out of approximately 1,000 votes cast as of 3:30 p.m. That could spell doom for Anna Little (endorsed by the Middlesex GOP) in her fight to overcome Ernesto Cullari (endorsed by the Monmouth GOP) where turnout was slightly-less crappy.

There are a few hotly contested races across the Garden State this evening although, as you’re well aware, our U.S. Senate and Presidential selections are not in question. We’ll keep you updated as the night progresses and results trickle in from NJ-6, NJ-7, NJ-9, NJ-10, etc and so on. Polls close at 8:00 p.m. EST.

We’ll also keep a sharp eye on the all-important Wisconsin recall race, one which our own Governor Christie has invested considerable time over the past few months. He knows that the same Big Labor forces conspiring to dislodge Scott Walker in 2012 will reunite and attempt to prevent a second Christie gubernatorial term in 2013. A win tonight for Walker would, therefore, have profound implications for the nation and New Jersey in particular. Polls close there at 9:00 p.m. EST.

Keep it here for all the latest, Save Jerseyans!!! Have I ever let you down before?