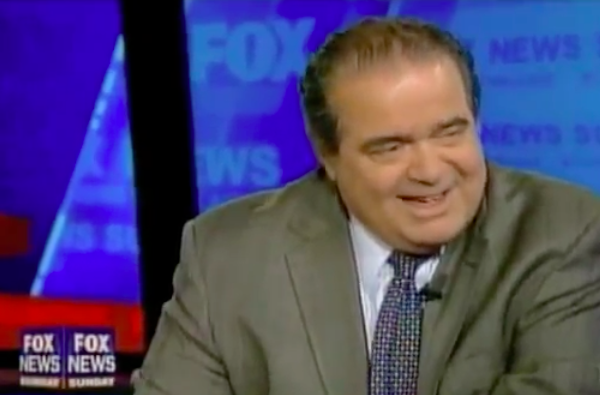 At one point, Wallace asked Justice Scalia whether President Obama’s notorious pre-Obamacare decision threats had an effect on the Highest Court in the Land. Many have questioned (with good cause) whether Roberts’s decision was the product of pure political calculus… or external pressure of some kind?

Scalia was cheerfully dismissive (his signature response to questions he’d rather not probe). In his opinion, “what can he [Obama] do to me?”

Whether Scalia can speak for Chief Justice John Roberts’s mindset is unclear. Scalia does have unequaled knowledge of the Court’s inner-workings as its most senior member (President Reagan appointed him back in 1986). It buoys my personal thesis that Roberts is a “big boy” in the colloquial meaning and was therefore solely to blame for his alarmingly utilitarian Obamacare opinion.

Interestingly, on a separate note, Scalia conceded to Wallace that the Supremes will likely have to tackle more 2nd Amendment questions in the near future. The great gun question is always controversial but has renewed potency following this month’s tragedy in Aurora, Colorado. Scalia didn’t want to speculate considering the likelihood of potential cases; he did, however, express his view that the U.S. Constitution permits at least some regulation of private weapon ownership even in the wake of the recent Heller decision.

Justice Scalia is a textualist, Save Jerseyans; in the case of the 2nd Amendment, he takes the right to “bear” arms very literally, meaning anything an individual cannot literally “bear” (like a cannon or a tank) can be regulated by the government. On the other hand, Scalia told Wallace that the constitutional parameters of regulations on more high-powered weapons (like a shoulder-borne rocket launcher) remains to be decided.