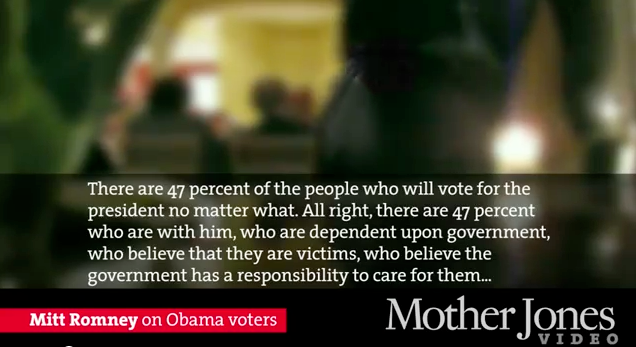 You’re going to hear a lot over the next 48 hours about this video from the arch-liberal Mother Jones blog, Save Jerseyans:

Yet again, the mainstream media and their liberal allies online are going to pillory Mitt Romney for the ultimate conservative crime… speaking the truth!

…the welfare state’s defenders often do. In 2009, 49.5% of Americans weren’t represented on a taxable federal return. Record numbers of Americans are on food stamps and roughly 1/3 of the country is receiving government payouts. We’ve got $16 trillion in debt and a dying economy because of it.

The kicker? According to Gallup, 67% of Democrats want government to do more!

Mitt Romney is simply stating the obvious at a time when Americans need to hear the truth; his campaign cannot compete for the votes of people who are life-long financial dependents on government largesse! It’s the modern, less-gory version of Roman conscription — when emperors/dictators killed rich citizens to pay for “bread and circuses” to win over the masses. It’s vote-buying, it’s a conflict of interest, it’s wrong, it’s what’s bankrupting this country’s treasury and culture, and that’s the ugly, unadulterated truth whether Mother Jones likes it or not!

And since he told the truth, Mitt Romney NEEDS TO STAND BY IT! If Team Romney despairs, freaks out and backs off, the media will have free reign to define his comments and bury his campaign with them over the next seven weeks. But if he stands firm, clears his throat and clearly says “yes, I’m running to save our country from dependency with the goal of securing a second ‘American Century,'” then he can win much-needed momentum in this long-stagnant race.

171 thoughts on “Romney Needs to Stand By Mother Jones Video”