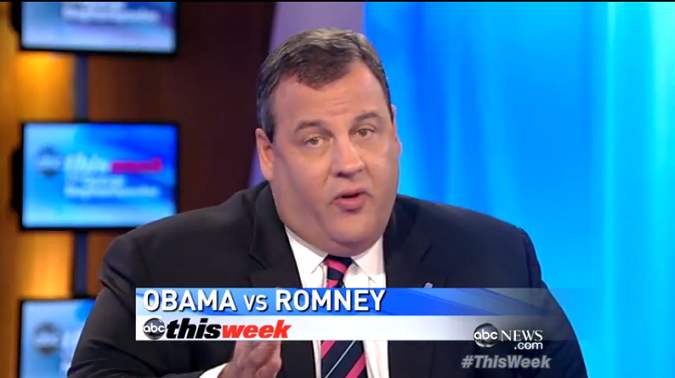 George Stephanopoulos interviewed Governor Chris Christie on this Sunday’s edition of ABC’s “This Week” program, Save Jerseyans; it was part of a full morning of appearances on all three major television networks.

Governor Christie was entertaining as always, and he gave viewers/pundits some great sound bytes on Todd Aikin, President Obama, tax rates, skewed polls (we’re going to have to agree to disagree there, Governor) and a few other major political topics.

Most interestingly, however, were the high expectations which Governor Christie apparently harbors for Mitt Romney’s performance at Wednesday’s first presidential debate in Denver, Colorado. Both camps are currently tripping over themselves to lower expectations. A confident Christie nevertheless predicted a strong/bold/aggressive Romney debate performance, declaring that he has “absolute confidence that, when we get to Thursday morning, George, all you’re going to be shaking your head, saying it’s a brand-new race with 33 days to go.”

The full Christie ‘This Week’ transcript is below the fold…

STEPHANOPOULOS: Hello again. We are heading into the home stretch of this campaign, just 37 days before the final votes, with all eyes on this week’s first debate. The candidacy are hunkering down at debate camp, but all our guests ready to weigh in on where the race stands, what to expect Wednesday, and what it all means for the final weeks of this race.

White House adviser David Plouffe standing by for the president, but let’s begin with the Romney camp and the man who kicked off the Republican convention last month, New Jersey Governor Chris Christie.

CHRISTIE: He’s going to. I mean, every time Mitt Romney has been confronted in this campaign with one of these moments, he has come through in the debate and performing extraordinarily well, laying out his vision very clearly, and also contrasting himself and his vision with whoever his opponent was at that time. So I have absolute confidence that, when we get to Thursday morning, George, all you’re going to be shaking your head, saying it’s a brand-new race with 33 days to go.

STEPHANOPOULOS: So how does he do it, though? Because you’ve said several months ago, the more we see of Governor Romney, more voters are going to like him. That hasn’t happened yet. On the one hand, he has to be assertive with the president, but likable to voters. How does he manage that balance?

CHRISTIE: Be truthful. I mean, listen, all he’s got to do is go out there and tell the truth, because if you tell the truth about what’s going on in our country, people are going to understand that that’s critical of the president’s stewardship, but also to lay out a positive and hopeful vision for what the future can be for our children and grandchildren under a Romney administration.

I think he can do both. Listen, Mitt Romney can walk and chew gum at the same time. I’m not worried.

STEPHANOPOULOS: How do you handicap President Obama as a debater?

CHRISTIE: He’s — he’s good. Listen — and I love all this stuff. I heard Ed Rendell the other day say, oh, he hasn’t debated in four years. Poor President Obama. He’s only been leader of the free world and commander-in-chief of our military during that time. I think he’s had a few debates inside the White House over time. And I think he’ll be very good. The president’s always been good, and he’ll be good on Wednesday night, but he can’t change the facts, and that’s going to be the problem for the president.

STEPHANOPOULOS: He’s been making the closing arguments in the battleground states, two-minute ads straight to camera. Here’s a portion of them.

OBAMA: Governor Romney believes that with even bigger tax cuts for the wealthy and fewer regulations on Wall Street, all of us will prosper. In other words, he’d double-down on the same trickle-down policies that led to the crisis in the first place.

STEPHANOPOULOS: If you were on the stage Wednesday, how would you respond to that?

STEPHANOPOULOS: What’s the lie there?

CHRISTIE: That he — Governor Romney is not talking about more tax cuts for the wealthy. In fact, what he said is that the wealthy will pay just as much under a Romney administration as they pay today.

STEPHANOPOULOS: But their tax rate will go down into the 20s.

CHRISTIE: Right. But their tax rate will go down, but they will lose deductions and other loopholes that will have them paying the same. That’s what Governor Romney’s plan is.

And so what I’d say — you know, I love those ads. I mean, you know, the president gets to say things like a million new manufacturing jobs, well, how, Mr. President? We’re still waiting. Four trillion reduction in the debt. Really, Mr. President? How? Simpson-Bowles? You haven’t endorsed your own plan. Nor has he come forward with a plan.

I mean, it’s a great ad. I have no doubt about that. It sounds really nice, and it looks nice. But there’s nothing substantive there.

STEPHANOPOULOS: But I — I can imagine the comeback from President Obama at that point, when you say where are the details, that same question could be put to Governor Romney. You’ve called for hard truths in the convention, but Governor Romney has not been willing to lay out which deductions are going to go away for the wealthy.

CHRISTIE: Well, listen, the president of the United States has an obligation after four years as being president to be the one who is the most specific.

STEPHANOPOULOS: So the challenger doesn’t have to?

CHRISTIE: Well, I didn’t say he doesn’t have to. I said he has a greater obligation. The president of the United States hasn’t stepped up to the plate and done that. That ad does nothing — nothing to add to the debate and discussion except to not tell the truth. I mean, he starts off by not telling the truth, which is that the president says Governor Romney wants more tax cuts for the rich. I mean, it’s just not true. Governor Romney has said it over and over and over again, the rich will not pay less under his tax plan.

STEPHANOPOULOS: Overall as a share, but their tax rates will come down.

And I think what we’re trying to do is to set up a system where America can be more competitive in its tax rates, both on a corporate level and on an individual level with the rest of the world, because we’re now competing in a global economy. And so that’s what Governor Romney is laying out, is a very clear vision on that.

STEPHANOPOULOS: But don’t voters have a right to know what those are?

CHRISTIE: Voters have a right to know what direction he’s going to take the country in. And he says he’s going to eliminate significant deductions and loopholes so that no one is paying less in the wealthy class than they are before. That’s very clear.

And here’s one thing he knows, that the president’s never learned, 85 percent of his legislation was Democratic in Massachusetts when he was governor. I worked with a Democratic legislature in New Jersey. You can lay out aspirational goals and visions, but then you’ve got to get down to negotiating with people to get things done. In Washington, D.C., the president draws hard lines and doesn’t ever know how to negotiate and compromise. That’s why we’re in the gridlock we’re in today.

STEPHANOPOULOS: Governor Romney has been getting a lot of advice from some pretty anxious conservatives. One of them is Charles Krauthammer, who wants a bigger, bolder campaign. I want to read some of what he said the other day. He says, “Go large, Mitt. For six months, Romney has been matching Obama small ball for small ball, a hit-and-run critique here, a slogan of the week there. His only momentum came when he chose Paul Ryan, yet he has since retreated to the small and safe. When you’re behind, however, safe is fatal.”

Do we need a bigger, bolder campaign from Mitt Romney?

CHRISTIE: Well, I think what we need is a big and bold performance on Wednesday night. And that’s what he’s going to give us. Got absolute confidence in that.

And the fact is that the ideas are there, but let’s face it, George, there’s been a lot of filtering going on. And I’m not going to sit here and complain about coverage in a campaign, because as a candidate, if you do that, you’re losing.

But what I will tell you is, this is the first moment when the American people are going to be able to see these two guys side by side, laying out their vision, unfiltered. And I think that’s going to be a powerful moment for Mitt Romney. And I think folks like Charles Krauthammer will be happy Thursday morning, certainly happier than they are now.

STEPHANOPOULOS: You alluded to, do you buy this argument that some conservatives are making that the polls are skewed against Mitt Romney?

CHRISTIE: I don’t buy that.

STEPHANOPOULOS: Not sure, right?

CHRISTIE: I don’t know if it’s — listen, I don’t think it’s intentional. I think, you know, you look at every different poll and look and its methodology and you can say whether it’s good or bad poll, but do I think there’s a concerted effort to skew the polls against Governor Romney? No, I don’t buy that.

STEPHANOPOULOS: Final question. Senator — Todd Akin running for Senate down in Missouri, last year, the Republican National Committee Chair Reince Priebus was here saying the RNC is not going to get involved in this race, but over the course of the week, we’re seeing more prominent Republicans — Senator Jim DeMint, Tom Coburn, Lindsey Graham, all coming out in support of Todd Akin. Do you think he should have the support of the Republican Party?

STEPHANOPOULOS: And he doesn’t have your support?

CHRISTIE: No, he doesn’t.

STEPHANOPOULOS: Governor Chris Christie, thanks very much for your time this morning.