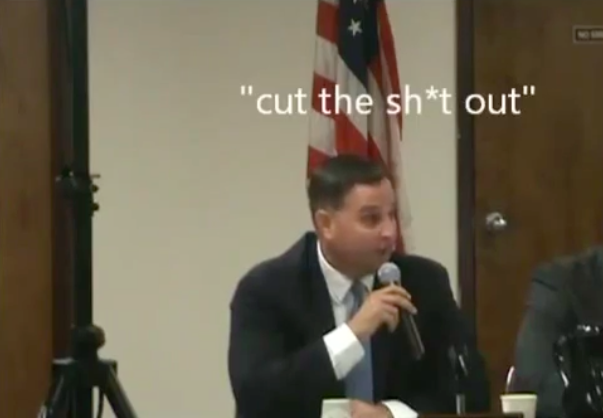 Governor Chris Christie is known for being brutally honest at this town hall meetings. Some would say this is an understatement, but a strong majority of residents approve.

Still, aren’t there limits to what a public official should say, Save Jerseyans? At least there should be; public leaders are supposed to lead by example! And when they don’t, it’s more than our politics that suffers. Our culture and the next generation of prospective leaders suffer, too.

I guess not everyone agrees? The Camden County GOP is circulating a web video featuring Freeholder Ian Leonard (D), swearing like a sailor, allegedly filmed during a September 20, 2012 public meeting:

Oh boy. Reportedly, the meeting was just the latest chapter in an ongoing clash between the all-Democrat Freeholder Board and opponents of the hugely controversial Camden City/County police merger.

According to his official biography, Leonard previously served as chief of staff for former Assembly Speaker Joe Roberts and is seeking a second full term on November 6th.

If he wins, county residents should spring for a bar of soap to commemorate the accomplishment!

Even if a member of the public is rude to you (which I didn’t hear, though to be clear, this apparently isn’t an unedited tape), leaders nevertheless need to keep their composure. It’s part of the job. Maybe I’m a little old-fashioned, folks, but I don’t believe there’s a place for THAT kind of coarse language in the public discourse. Democrat, Republican… I don’t care who you are, nor do I care what the context might’ve been. Keep it to yourself and vent after the meeting. That’s what a bench press is for.