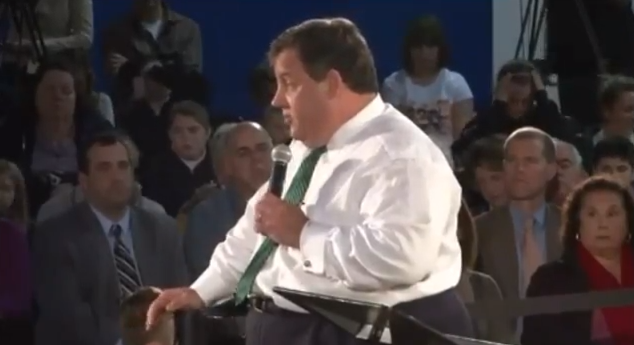 Governor Chris Christie hosted his first town hall meeting since Sandy on Friday, Save Jerseyans, and he spent most of his time discussing the aftermath with a 500+ person Belmar crowd.

Inevitably, however, the topic of Newtown was on attendee’s mind. One school-aged boy took to the microphone and asked the Governor what he felt needed to be done concerning school safety. Christie responded by delivering an articulate albeit non-specific response, endorsing a comprehensive everything-on-the-table national conversation in lieu of a myopic focus on any one issue:

The Big Guy’s inner-prosecutor appeared particularly hostile to the notion of introducing armed guards to New Jersey school. “You can’t make this [school] an armed camp for kids,” the Governor told his young questionner…

Having one or a few armed specialists at every school campus does not an “armed camp” make, folks, though Christie is absolutely correct to remind everyone that gun control is hardly an elixir for that which ails our youth.

Crazy people will find a way to introduce craziness into our lives. For that very reason, I don’t see the harm in adding an armed guard and equipping a few faculty members at each facility. Do we really want our kids and teachers to be sitting ducks? This isn’t a radical or new concept. In fact, many of our inner city school and high schools already have police present on permanent assignment. The cost would be minimal given the $2.05 billion increase to education funding in our most recent state budget. Don’t tell me it’s all going to text books and chalk!

And let’s not kid ourselves: America’s children are exposed to plenty of damaging stimuli every day on television and in the schoolyard. It’s a sad commentary on our society that this step is necessary, but given the extraordinary stakes, I really don’t see them downside. Do you?