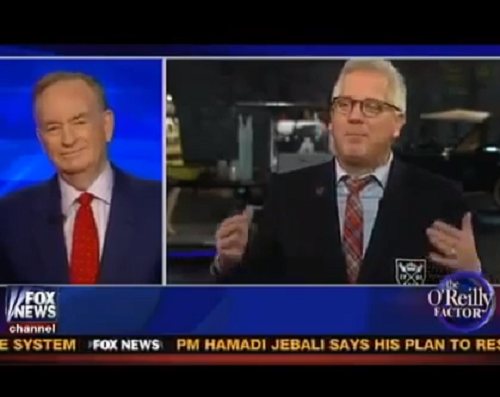 Now It’s Beck vs. Scarborough: How About None of the Above?

The entertaining but sometimes fickle Glenn Beck has fallen out of love with Governor Chris Christie, Save Jerseyans:

But every reaction has an equal and opposite reaction in modern American politics. Joe Scarborough, who never misses an opportunity to dump on another Republican to buoy his “bipartisan” credentials with other media types, promptly fired back at Beck in a Politico column:

Glenn Beck must be infuriated. Why, this Chris Christie character has created a new kind of gender gap in this Democratic state that has him actually winning the female vote by 23 percent. Numbers like that have to enrage talkers like Glenn Beck, who have spent most of their adult lives working to make women voters run AWAY from the Republican Party faster than you can say “government-sanctioned vaginal probe.”

That’s the 2013 GOP in a nutshell, folks, and neither commentator is helping solve the problem…

Many movement conservatives/libertarians like Beck have the right ideas, but they refuse to accept reality: a socioeconomically and racially diverse country of 300+ million people needs the stability of a two party system; thus, demanding ideological purity is sure path to permanent minority status for the Republican Party.

The angriest, purest candidate is rarely the best candidate (see 2012 Senate Races). If style points didn’t matter, than every Save Jerseyan would be the next Ronald Reagan. We know that isn’t the case! Pragmatism is conservative.

The Scarborough “establishment” wing abhors ideology, but that sentiment results in a wishy-washy “better manager” approach to political messaging that fails to provide a meaningful, compelling contrast for voters come election time.

Given the choice between the guy who passionately argues for free stuff (liberal candidate A) and the dude who wants to give you less free stuff with more strings attached (establishment GOP candidate B), who is the average fiscally ignorant, civics education deprived voter going to choose? Three guesses, and your first two answers don’t count.

It’s a false choice, my friends. And I refuse to accept there isn’t a middle way. That’s why we remember Ronald Reagan so fondly… not because he was ideologically pure (he definitely wasn’t) and not because he compromised his principles to get elected (listen to his “no pale pastels” speech).

Until the older heads in our parties on BOTH wings of the GOP divide understand this crucial, nuanced distinction between (1) surrendering your principles and (2) losing your head, the Republican Party is going to continue losing competitive contests. So how about “none of the above”?

2 thoughts on “The False Choice”