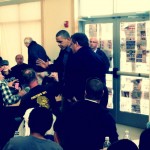 In case you missed it, Save Jerseyans, Trenton Democrats were about to have a kitten throughout February over the fact that New Jersey State Treasurer Andrew Sidamon-Eristoff has yet to testify concerning the Superstorm Sandy Ashbritt contract.

Democrats used the word “frustrated.” And the taxpayers do deserve answers, though the Administration has provided a lot of background information to date. Go ahead and click here to read the contract.

I only wish these “born again” watchdogs had discovered their zeal for transparency about 10 years ago as the Garden State initially went down the fiscal rabbit hole. You don’t even have to examine McGreevey’s seedy tenure; the Corzine era is replete with examples of shady dealings that cost New Jersey BIG money…

…like back in 2009, when none other than State Senator (and Chris Christie’s presumptive 2013 challenger) Barbara Buono suspiciously shot down Jersey Joe Pennachio’s attempts to question the Corzine Administration’s handling of the Lehman Brothers investment debacle:

You can click here to review the Lehman investment timeline. Buono was Chair of the Senate Budget and Appropriations Committee at the time.

Buono and her fellow Dem colleagues had a golden opportunity to ascertain why Jon M’Fn Global Corzine allowed $182 million of New Jersey pension funds to be invested with Lehman Brothers throughout Spring 2008 despite repeated warnings that Lehman was on the verge of collapse.

Where were the Trenton Democrats on that one?

Playing politics apparently! So why should voters trust a Buono Administration to behave any differently? You’ve got me…