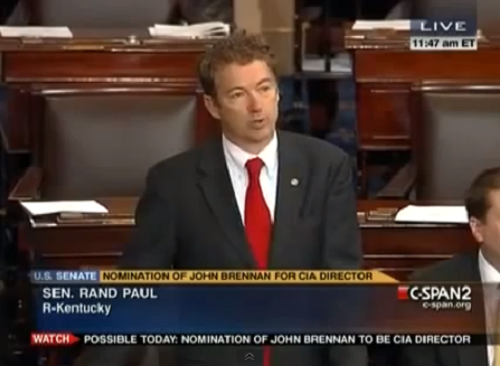 As of this writing, Save Jerseyans, Sen. Rand Paul (R-KY) is engaged in one of the most dramatic practices unique to American-style democracy: the Senate filibuster.

Typically, U.S. senators “filibuster” a nomination or legislation by refusing to provide a majority of the 60 votes required for cloture. Paul is using the much rarer one-man approach made popularly famous by Mr. Smith Goes to Washington whereby one Senator continues to speak on the floor until he decides to stop (or simply cannot carry on). The Senator’s aim? Holding up the nomination of John Brennan for CIA director; he hopes this gesture will raise awareness of a controversial new Justice Department policy that many believe would permit drone strikes on American citizens without any due process whatsoever.