Stahl Gets In and Slams Middlesex Dems 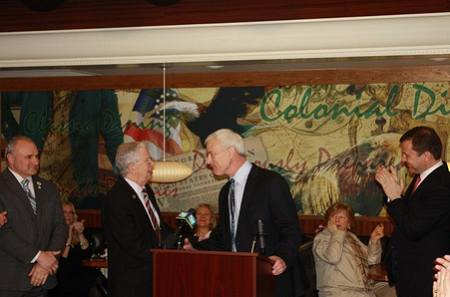 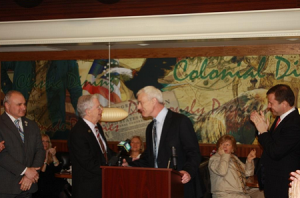 Mayor David Stahl says he plans to challenge the status quo in Trenton and propose bipartisan solutions to fix NJ. As a two-term Mayor, David has been working with the Republican and Democrats on council to cut spending and property taxes, increase small business job growth and cut red tape, a focus which reduced business vacancies along Route 18 by 40%. David and his surrogates specifically touted a proven record of success working with both parties to provide solutions that benefit residents of East Brunswick.

Mayor Stahl will run against Assemblyman Peter Barnes for gubernatorial candidate Barbara Buono’s open state senate seat in the general elections 2013. Surrounded by supporters and diner patrons, David discussed his rationale for switching parties with the assembled audience and media:

The entrenched party machine in Middlesex county has created a gridlock in Trenton, and seems to care more about handing out taxpayer funded jobs to contributors and insiders than providing jobs, and tax relief to middle class tax payers and small businesses.”

Also present at the announcement was Senate Minority leader Tom Kean and Senator Sam Thompson, the East Brunswick council members, Camille Ferraro, Mike Hughes and Jim Wendell. Among many other Republican party leaders and officials around the county.

Middlesex County Republican party chair, Senator Sam Thompson said he is very excited to have the
highly successful two term Mayor on the team. He said that Mayor Stahl has shown fiscal restraint, at a time when fiscal restraint has been sorely needed. Senator Thompson is very confident that David, with the support of the Republican party and the Governor, can win this election and turn the district red.

We needed change in NJ and when Governor Christie was elected, this was the time. Historically property taxes were capped around the state. Christie wanted to work among party lines to get this done. Like Governor Gov Christie Mayor Stahl has been a bipartisan reformer. He’s built bridges between the 2 parties, and created jobs. He’s a forward thinker, that’s absolutely ready to join the governing majority, and make the tough decisions.”

Governor Christie also issued a statement on Stahl, expressing his belief that “David has consistently shown himself to be a pragmatic reformer who has always displayed leadership and resolve as Mayor of East Brunswick, regardless of the party with which he was affiliated.”

David Stahl said he is grateful for the support of Governor Christie and looks forward to earning support from voters of every political persuasion in November. Legislative District 18 includes the municipalities of East Brunswick, Edison, Helmetta, Highland Park, Metuchen, South Plainfield, and South River.

23 thoughts on “Stahl Gets In and Slams Middlesex Dems”