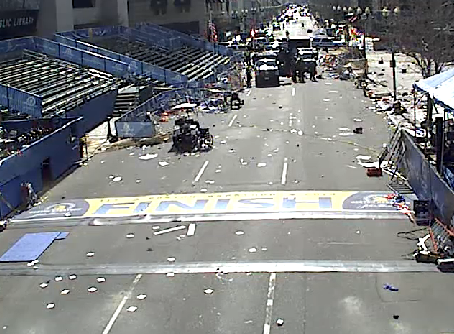 We’re still not sure how many human beings were injured during today’s Boston Marathon terrorist attack, Save Jerseyans; the latest estimate is 3 deaths and dozens of injuries ranging from superficial wounds to amputations. The details are grizzly. Limbs, blood, and screams littering the streets of one of America’s great cities, the home of “Patriots’ Day,” where citizens were celebrating the 238th Anniversary of the Revolutionary War engagements at Lexington and Concord.

The details concerning who/how/what happened remain clouded at this hour. Unlike the ghouls over at CNN, we’re disinclined to wild speculation!

Again, Governor Christie speaks for all of us in the Garden State when he tweeted out a short time ago that “[o]ur thoughts are with the runners, their families and those affected by this horrific tragedy.”

Here’s chilling (and be warned… graphic) footage of the explosions (h/t Weekly Standard):

4 thoughts on “Terror in Boston (UPDATE)”