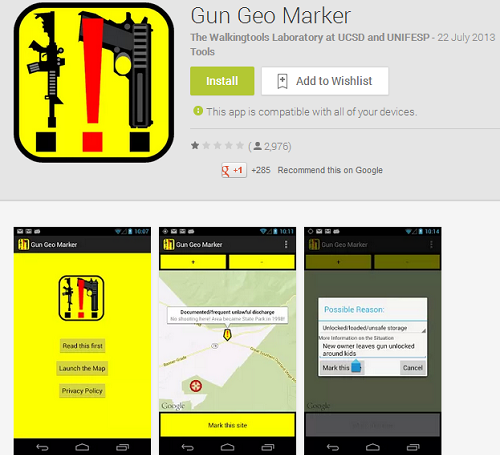 “This type of app will put lives at risk and we need to take steps to ensure this kind of dangerous product is banned in New Jersey,” said Asm. David Rible (R) in a statement announcing that he was working on legislation to prohibit its use in New Jersey. “Criminals may think twice about using this kind of technology if they know they are looking at three years in prison.”

Unsurprisingly, the lefties at Google see things a little differently; check out the official app description…

The App is in part a documentary, and in part a disabled demo version of the original experiment. Our app rating is actually a source of pride in this context. The App was pilloried by a paranoid community of deluded gun rights activists in July 2013; deluded because the gun owning community in the United States shoots itself in the foot – and endangers all of our 2nd amendment rights – when it comes out against reasonable solutions to the gun violence epidemic. This includes Apps that might allow it to better allow gun owners regulate themselves, foment better safety practices, and prevent unnecessary gun deaths. But in short, the community instead decided that this App was a threat and spammed it up with useless info that effectively disabled it for sincere users. How many lives are being lost due to the congressional equivalent of this obstruction? Such as when the U.S. Senate rejected reasonable and constitutional universal background checks in April of 2013?

Wow. Does it get any more self-righteous than THAT, Save Jerseyans? I guess restraint and modesty are overrated virtues when you already control most of the Internet. Its employees should appreciate the danger better than most. Google has joined other online giants including Facebook in pushing back against recent NSA abuses. Forget about criminals for a moment… what’s to stop the government from utilizing data collected via this new app?

The issue is near and dear to Asm. Rible’s heart particularly since he is a retired law enforcement officer (hailing from Wall Township). He recently co-sponsored a bill that prohibits the release of legal gun permit holders’ names and addresses.