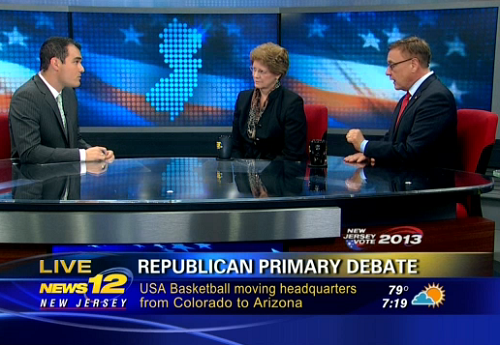 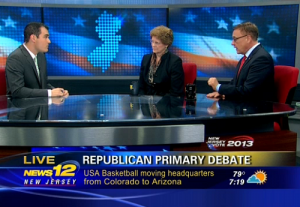 I’d like to have something sexier to report after last night’s one and only GOP U.S. Senate special election primary debate, Save Jerseyans, but I don’t.

We saw two conservatives with virtually identical views get together on News 12 for a remarkably low-key exchange on a variety of topical issues.

A different Lonegan will undoubtedly show up to debate Cory Booker (polls shows him with a virtually insurmountable lead over Alieta Eck, a first time candidate). For now, he behaved like any experienced politician would sitting on a giant lead: keeping his distance in order to avoid incurring an injury and giving his opponent a foothold.

Eck, for her part, showed no interest in landing a punch. “I’d have to agree” was her go-to mantra on everything from immigration reform to NSA spying. She presented well but didn’t make an impact; challengers fighting from far behind can’t afford anything other than a knockout.

The former mayor didn’t even feel a need to address his opponent directly in his post-debate statement. “Tonight’s debate allowed New Jersey voters to hear where the candidates stand on the most important issues facing our state and our country,” Lonegan opined. “I look forward to engaging in a series of in-depth debates with the Democrat nominee in this Senate race. The people of New Jersey deserve to know where both the Republican and the Democrat nominees stand on key issues like Obamacare, the NSA surveillance programs, taxes, the war on coal, more regulation on our small businesses, our looming debt crisis, and protecting our values.”

So what an undecided GOP primary voter to do? Pick the personality (and the campaign) which you think would give Cory Booker the best run for his money over the next couple of months, Save Jerseyans.

Lonegan is certainly better practiced, organized and prepared for a general election contest. That being said, his name recognition could prove a double-edged sword. He’s a “perennial” candidate with a combative reputation, and that may prove the understatement of the century! I know at least a few Republicans who would rather see Booker win than back a man whom they’re practiced at hating going back to 2009. I’m not one of them, for the record, despite my reservations. It is what it is.

Dr. Eck, on the other hand, is a fresh and friendly face who is undeniably intelligent (she’s a physician) despite the fact that Steve has clearly had more time to develop his talking points. But is she ready for prime time? That’s more debatable than her credentials, although an affable female doctor with a great biography needs to be considered a future prospect. Is it worth throwing her away in a battle that will be an uphill climb for either GOP contender?

Am I helping you at all, Save Jerseyans? Here’s hoping the answer is yes because you’re going to have to do this type of analysis absent ideological differences on the ballot this August 13th. Style is as important as substance in a 30 second TV spot or two-sided mailer. Choose wisely.