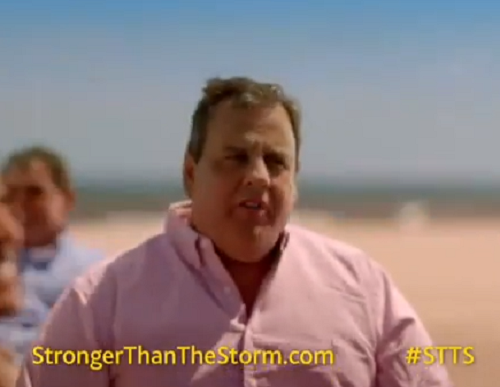 The feigned outrage over the “stronger than the storm” ad campaign stinks of desperation, Save Jerseyans.

Plenty of U.S. states (Michigan and New York, for example) spending as much or more on advertising as New Jersey. Governor Christie used money from the pork-bloated Sandy aid package to pay for the advertising campaign at issue; it was a reasonable move, to be sure, given the devastation facing the post-Sandy Jersey Shore (a major source of tax revenue for the entire state). Many folks outside of New Jersey weren’t shore which beaches were open given the tenor of news reports.

Yet the media is joining Barbara Buono in her forced condemnation… why? Because the ads looked like campaign ads. So what? The state’s media establishment just endorsed Cory Booker for US Senate on the basis of his public persona and nothing else. Why can’t Christie leverage his star power, too, without the snark and cynicism?

And besides… since when do liberals care about wasting our cash? If Senator Buono wants Governor Christie to pay back money used toadvertise the post-Sandy Jersey Shore, then the taxpayers should get to keep her matching funds, too.