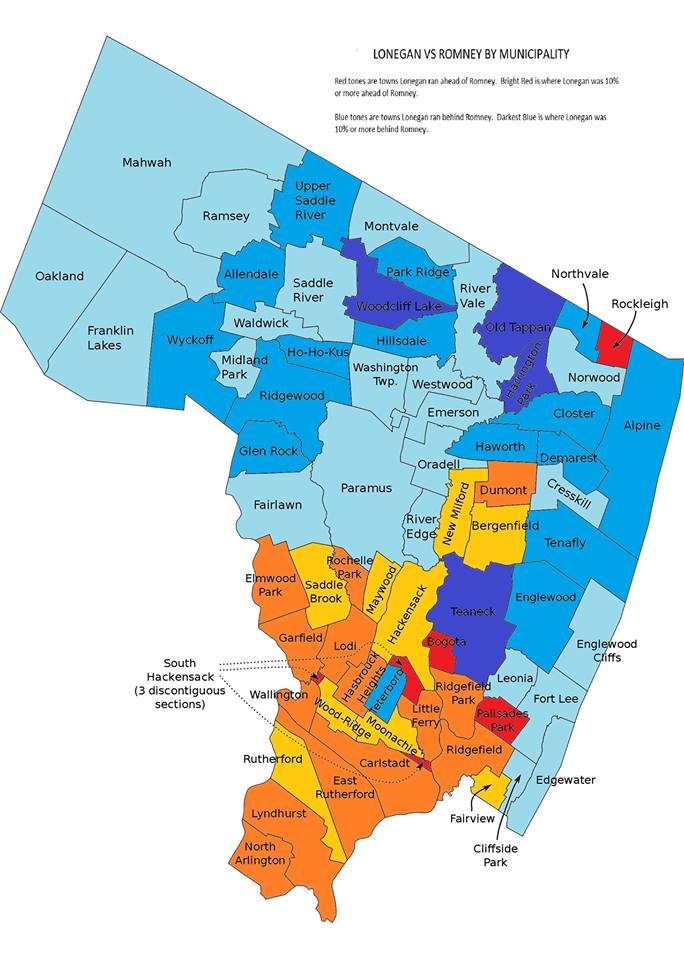 By Rick Shaftan | The Save Jersey Blog

Comparing the 2013 special with the 2012 presidential reveals some interesting comparisons.

Statewide, Lonegan ran 4 percent ahead of Mitt Romney – enough to have elected Romney had he run that much better nationwide.  But Bergen County was one place where Lonegan actually ran behind Romney.

That’s news to people South of Route 4 where the former Bogota Mayor exceeded the 2012 Romney percentage by 10 points in Ridgefield, 11 points in Palisades Park, 12 points in Bogota and 16 points in South Hackensack.

Lonegan’s drop from 28 to 17 percent in Teaneck is heavily caused by a major drop in the GOP vote share among Orthodox Jews. Mitt Romney won 58 percent of the vote in the four big Teaneck Orthodox districts (9, 10, 11 and 12) compared with just 28 percent for Lonegan, turning a 514 vote Obama deficit into a 749 vote Booker margin.

Even in the Upper Bergen County towns Lonegan carried, there was a major dropoff: Ho-Ho-Kus from 64 to 55 percent, Upper Saddle River from 66 to 58 percent, Alpine from 60 to 53 perecnt and Park Ridge from 58 to 51 percent.

It’s more than a little ironic that Cory Booker — a candidate whose main message was class warfare and support for left-wing programs paid for by wealthier taxpayers — would win an election with the votes of the very people he wants to punish with his very radical and extreme economic policies.