Tragic report this morning from the Star-Ledger, that a second man has now died in the hospital from last night’s Newark shooting. Along with a separate shooting, this makes three killed in two days in Newark.

Through September 29 (the most recent police data release) there had been an 8 percent increase in year-to-date murders to that point over last year, from 64 to 69.  If that 8 percent increase holds through year-end, there will be 103 murders in Newark this year. 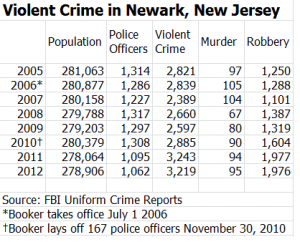 As the chart shows, that would top the total from Sharpe James’s last full year as mayor 2005, and come close to the totals in Booker’s first partial and full years, 2006 and 2007, before his surge in police hiring turned the tide. Unfortunately, after Booker’s police layoffs the trend has completely reversed, and murders are now set to increase for the fifth year in a row, reaching a level higher than when Booker took office.

As our latest video shows, Booker has been checked out and has been as derelict with the City of Newark in his second term as he was when he let the property he owned at 130 Court St become a squatter-infested fire-trap: