Lonegan Kicks Off (and Punches Back) 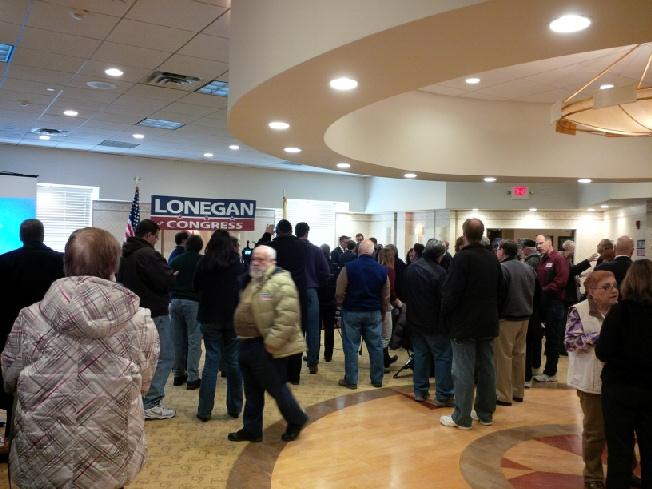 Some individuals enter the political atmosphere quietly and burn up without much commotion. The former Mayor of Bogota invariably prefers to make an impact.

Steve Lonegan rallied dozens of supporters this afternoon at a packed hotel reception room in heavily-Republican Toms River, Save Jerseyans, a show of force designed to kick off his 2014 CD3 primary campaign before county screening committees pass judgment on a massive field of candidates both real and hypothetical.

“Republicans in New Jersey need a strong and consistent voice in Congress, and the Third District deserves a candidate who is prepared to win,” Lonegan declared to an eager audience that his campaign estimated at 150 strong. “I won the Third by 8 points in October and I’ll win by even more in 2014.”

The crowd’s enthusiasm wasn’t perceptibly dampened by the inevitability of an impending bloody primary battle.

Lavallette Mayor Walter LaCicero, an ardent Lonegan backer who spoke at Thursday’s kick off event,  released a statement on Thursday night responding directly to Sen. Dawn Addiego’s Thursday salvo insisting that Lonegan is “no Reagan” worthy of the nomination:

“Sen. Addiego’s troubling comments earlier today are unbecoming of a State Senator and contrary to President Reagan’s eleventh commandment. They are also woefully uninformed. Steve Lonegan has been working to build and unite the Republican Party in New Jersey under a banner of bold colors, not pale pastels. Over the years, he has had tremendous success in Burlington and Ocean counties and even won the District in 2013 by a wider margin than Rep. Runyan did in either of his two victories. Steve will win the primary, he will win the general, he will help carry down-ballot candidates to victory, and we will welcome Sen. Addiego to the victory party in November. “

During the actual rally, Mayor LaCicero touted Lonegan as “our best chance to hold on to the Third District and carry the down-ballot races in 2014,” a claim that Lonegan supporters continue to buoy with data from his recent U.S. Senate run, a practice which detractors counter is akin to comparing apples and oranges.

42 thoughts on “Lonegan Kicks Off (and Punches Back)”