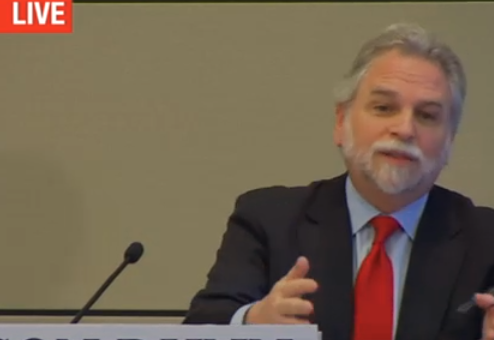 “The truth is inconvertible. Malice may attack it and ignorance may deride it, but in the end, there it is.”

Randy Mastro of Gibson Dunn chose to close Thursday’s Bridgegate internal review presser on Thursday with a Churchill quote. I think it may prove to be an appropriate choice.

The report itself will keep the media machine churning to be sure, but near the end of his remarks, Mastro offered up a critical point that seemed to sail over the heads of most of the press conference attendees. Not that I’m surprised in the slightest.

Here’s the uber-relevant portion of the report referenced by Mastro:

“The Governor became concerned about what he was hearing and demanded straight answers from his senior staff. On December 12, 2013, he had further inquiries made of Kelly  and Stepien. Both denied any involvement in the decision to close these lanes. Kelly even claimed to have searched her emails, showing a couple to the Governor’s Chief of Staff, Kevin O’Dowd, a former federal prosecutor, but none of the damning private ones proving her advance knowledge and participation. But Kelly was nevertheless panicked by what she considered to be O’Dowd’s “grilling.” She called her staffer, Christina Renna, that same night to make a desperate request: delete the email that Kelly sent to Renna on September 12, 2013, where Kelly, upon learning Mayor Sokolich was “extremely upset,” responded: “Good.” Despite Kelly’s attempt to cover her tracks, Renna preserved a copy of that email.”

The Administration’s attorneys, reportedly paid $1 million to conduct their investigation, believe it was a two-man job, but according to them, Kelly came in on the back end. “David Wildstein is the person who originated this idea and orchestrated it,” Mastro alleged at the briefing. “We don’t know why [Kelly] signed off. We don’t know why yet he targeted Fort Lee and Mayor Sokolich. But we can tell from the nature of the communications that there was some ulterior motive.”

What was Governor Christie doing while all of this was going on? The report paints a dramatic picture:

The very next morning, on December 13, 2013, the Governor convened a special meeting of his senior staff and also invited Drewniak. He stood the entire time and raised his voice. He told them he was concerned they were all suffering from “senioritis” following the election. He said the national attention was a double-edged sword: “The spotlight can turn to a searchlight  real quick.” He mentioned a number of miscues but then focused on the George Washington Bridge lane realignment fiasco. He said words to the effect of: “This is a mess, and now I have to clean it up.” He demanded to know from each of them in that room whether they had any prior knowledge or involvement in the lane realignment. He said he was going to hold a press conference later that day to set the record straight. He told them to come forward with the truth that morning, to go tell O’Dowd or Charles McKenna, then the Governor’s Chief Counsel. “The confessionals are open,” he said. But Kelly did not come forward. To the contrary, when questioned for a second time by O’Dowd that morning, Kelly continued to deny any involvement. Later that morning, the Governor held his press conference, saying he had been “assured” by his senior staff and Stepien that they were not involved. He also announced at the press conference that Baroni would be replaced at the Port Authority by Deborah Gramiccioni, one of the Governor’s senior staffers and also a former federal prosecutor.

The immediate next sentence from the report concludes that “[t]he “assurances” that the Governor had received proved to be inaccurate.” That’s inarguable.

And therein lies the likely totality of both the Governor’s redemption and his sin, Save Jerseyans. Did you catch it?

No serious person disputes Governor Christie’s assertion that he didn’t order the lane closures. This report, if accurate, also makes it clear that he wasn’t aware of any wrongdoing on the part of his staff until shortly before both Stepien and Kelly were exiled back in early January. as he’s repeatedly insisted in his public remarks.

Which makes sense, right? After all, why would the Governor’s top legal advisers privately “grill” Bridget Kelly at his direction for her email history – and then fail to follow up more aggressively – if Chris Christie already knew the answer? It doesn’t make a ton of sense.

I’m anticipating the conspiracy theorists in our Save Jersey audience. Yes, there’s a 5% chance that it was all part of an elaborate ruse designed to find and destroy evidence. But if it was a cover-up, then wouldn’t bringing Kelly into it improve the likelihood of getting the emails that they were after? [And as a side note, bravo to Christina Renna for doing the right thing.]

A more likely explanation? They genuinely didn’t know that Bridget Kelly had dramatically overstepped her bounds and participated in a political reprisal despite building suspicions that someone wasn’t being completely forthcoming.

The report’s version of events suggests that at worst (and this is the “sin” part), the Christie inner circle waited far too long to seriously question the who/when/what questions under-girding story that had been in the papers since the beginning of September 2013, a full three months before the infamous “come to Jesus” meeting described in the report passage posted above.

My words; not the investigators’ own.

It’s totaly reasonable to believe that a traffic jam wouldn’t make it onto the Governor’s top priorities list. Less easily explained is the Christie inner circle’s willingness to take Kelly’s word for it as the story began spiraling out of a control in December.

If I’m Chris Christie, I’m probably regretting heading out in front of the cameras on December 13th and relying on his staffers’ representations. Not because the Governor lied. He didn’t. Simply owing to the fact that as a smart politician and experienced prosecutor, Chris Christie clearly had serious concerns at that point in time. Serious concerns. Nothing in the report suggests that December 13th meeting laid his primary concerns to rest.

I’m not ready to draw any definitive conclusions just yet, Save Jerseyans, but if the report’s narrative holds, as I said earlier today, “then the worst you can say for Governor Christie is that he gave some young guns waaay too much rope and they proceeded to hang themselves with it.”

I say “young” because, in a perfect world, Kelly would’ve ratted on Wildstein to her superiors. She didn’t. That was her fatal mistake before the alleged cover-up even began.

But think about Governor Christie’s role for a second without your partisan lens on. Considering some of the massive errors of judgment perpetrated by his immediate gubernatorial predecessors (rest stop visits, pension funds evaporating, etc and so on), it pushes the envelope of plausibility to suggest Bridgegate warrants the level of excited media coverage and politically-motivated discussion that it’s generated thus far.

We’re not uncovering evidence of a massive conspiracy. We’re looking at what increasingly looks like bad hire without adequate follow-up supervision. That’s not a hanging offense in my book unless the U.S. Attorney brings something new to the table.