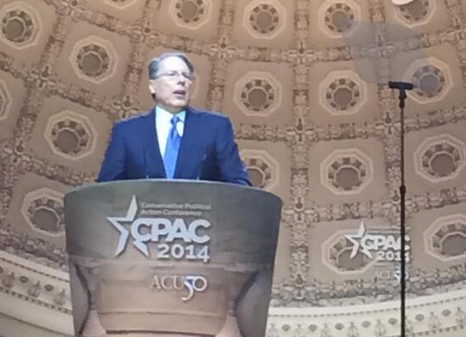 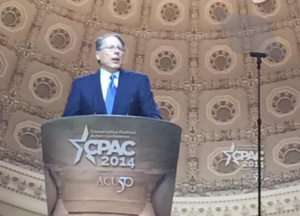 NRA chieftain Wayne LaPierre’s Thursday address was the first speech I was able to take in since coming down to CPAC 2014 (Conservative Political Action Committee), Save Jerseyans.

I wasn’t disappointed. LaPierre’s remarks were fantastic and drew a steady stream of applause and cheering from the attendees. As a staunch Second Amendment supporter and a member of NJ2AS fighting the legislature’s gun grab in New Jersey, I was moved by his short but delightfully on-point speech.

LaPierre started with an understated but good-humored line that drew a big response: “Hey, there must be some NRA members out there!”

“A little over a year ago the NRA offered a simple proposal to make our schools safer. The media and the politicians responded by calling me every nasty name in the book. But Americans responded differently, in many cities,counties, school boards, teachers, parents, legislators, police agreed with us and put armed security guards in place. History has proven the truth that Obama’s anti freedom activists everywhere denied and tried to suppress the truth that firearms in the hands of good people saves lives.”

That comment got the crowd going. And it got better from there:

“The Political elites can’t escape and the darlings in the media cant escape the God given rights of the people to protect themselves. With that fundamental human right the NRA stands unflinching and in defense of our freedoms. NRA has 5 Million members and with Americas 100 Million gun owners, we will not back down, not now, not ever, I assure you of that.

Rather than write the whole speech here, I will give you some more great highlights:

“The NRA will not go quietly into the night. We will fight for your rights”

“One of Americas greatest threat is a news media that fails”

This speech truly struck a chord with me given everything New Jersey’s anti-liberty legislature led by Senate President Steve Sweeney and Assembly leader Lou Greenwald have continuously introduced new laws which infringe upon our Second Amendment rights in New Jersey.

I had hoped LaPierre would specifically mention the struggles we are facing in the North East states where lawmakers in New York, Connecticut, and New Jersey are proposing a plethora of new restrictive laws bordering on the point of de facto confiscation. It still very well done and certainly worth the trip down I-95!