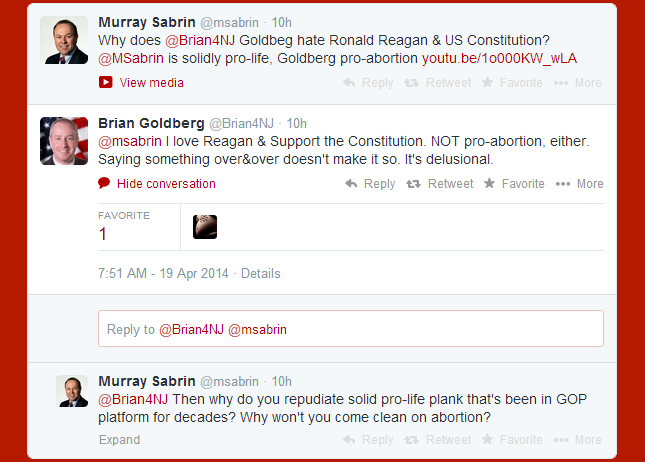 It’s hardly unusual for campaigns to slam opponents by way of social media in 2014, Save Jerseyans, but when the party establishment writes off the entire race and none of the candidates are “self-funders,” then social media wars take on a whole new level of intensity partly as a matter of necessity, in a way that many never imagined, ironically, before Cory Booker (D-Twitter) came into existence.

U.S. Senate hopefuls Murray Sabrin and Brian Goldberg threw down with each other on Twitter in the run-up to Easter/Passover weekend over guns, abortion and, of course, fidelity to the memory of Ronald Reagan:

We’ve moved from two-hand touch to tackle in no time flat!

Never one to mince words, Sabrin previously criticized Golberg’s reluctance to support a ban on abortion via press release. With the most money to spend but still lacking his primary target’s county line total, the Ramapo professor is stepping up his attacks online, rhetorically asking his Twitter followers whether “@Brian4NJ Goldberg running for US Senate or bumpersticker king? His policy positions are cliches w/o substance. @MSabrin offers specifics.”

Goldberg, for his part, denied Sabrin’s characterization of his positions and sought to re-frame the debate as one between a conservative (Goldberg) and the libertarian (Sabrin), even digging up and tweeting out a negative student review (the agitated student complained that Sabrin didn’t do anything other than recycle comments from a “damn libertarian website”).

Is any of this good for the party? I don’t know, but it is undeniably entertaining for politically-minded Twitter fans to watch, and it’s certainly an interesting experiment in social media campaigning for those of us who know that digital campaigning isn’t just the future but the now.

45 thoughts on “The Social Media Primary”