Dueling Showboat Pressers on the Boards 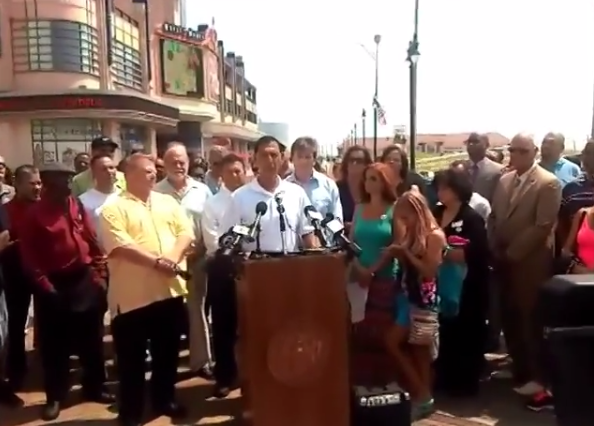 This is why people hate politics, Save Jerseyans.

Opportunistic as ever, the CD2 Democrat campaign of Bill Hughes Jr. staged a press conference in front of the soon-to-be-shuttered Showboat Casino in Atlantic City last week to criticize incumbent Frank Lobiondo for allegedly not doing enough to prevent job losses as well as Showboat’s owner, Caesars Entertainment. The substance of the blame was typical liberal malarkey, blaming business owners for making business decisions instead of taking a critical look at the government’s own role in the stagnation of Atlantic City.

Then an enterprising A.C. Press reporter picked up on an interesting angle…

The day after taking complaints about @ShowboatAC ‘s mgt, @Hughes4SJersey schedules $30-$1,000/per fundraiser there: http://t.co/xnwswhtpf1

Now, I’m not saying there’s anything wrong with hosting a fundraiser at a casino whose parent company is about to layoff workers. In fact you, could make the argument that it’s an attempt to help… I guess?

.@dnharper: We need to support @ShowboatAC & employees to show local interest still exists, not walk away. Event was on books since May.

The problem with Hughes’s tweet response is that you can’t have it both ways as liberals often try to do: deriding the free market while simultaneously practicing selective engagement in it when it suits you.

Not to be outdone, Hughes’s opponent Frank Lobiondo and Asm. Chris Brown held their own Boardwalk press this week, also in the shadow of the Showboat; Lobiondo hit on the other weakness of Hughes’s bitch fest, specifically, the limited ability of the feds to do anything about it:

Brown took his turn at the microphone and said what’s needed is patience, and pledged to introduce three new bills in the State Assembly. “We need to remind everybody there is a five year, bi-partisan agreement in effect. This notion since gaming revenue is down we should abandon the five year agreement is just plain wrong,” he insisted.  “We must be realistic and remember, it took Las Vegas over ten years to transition to the point where they are receiving more revenue from non-gaming sources than gaming resources.  Until at least 50% of Atlantic City’s revenue is from non-gaming sources, a casino outside of Atlantic City will be bad for the entire state.”

The two-term legislator nevertheless said that the casinos bear ultimate responsibility for their own respective fates.

“New Jersey entered into a partnership with the casino industry.  In exchange for the second lowest gaming  tax rate in the nation, the casinos would provide good jobs for our residents, economic revitalization, and services for seniors and disabled,” Brown continued. “But when a corporation like Caesars closes a profitable casino in Atlantic City while they choose to build a new $880 million casino in New York, it hurts our middle class, working men and women, mars the image of Atlantic City, and breaks its promise to the state.”

For a thorough discussion of how Democrat and Republican intervention to save A.C. has actually helped bring about its current plight, Save Jerseyans, read this excellent piece from Joe Schilp from Monday. It’s a must read.

2 thoughts on “Dueling Showboat Pressers on the Boards”