Rooney: Astorino, Christie Both “Not Behaving” 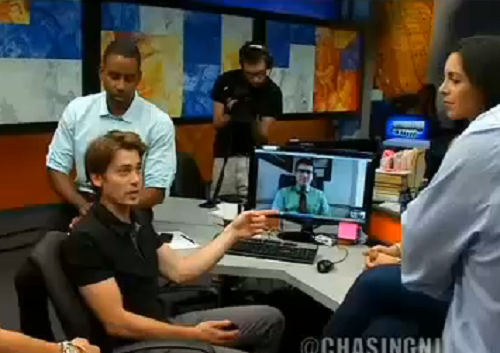 By STAFF | THE SAVE JERSEY BLOG

Our Blogger-in-Chief Matt Rooney discussed the war of words between New York GOP gubernatorial nominee Rob Astorino and Chris Christie on Wednesday night’s edition of Chasing NJ, Save Jerseyans, at about the same time as both men “briefly” crossed paths in Aspen.

Matt’s two cents? There’s fault to be found in both camps.

Check out the video below our fold….

Matt Rooney from the SaveJersey blog chimed in to discuss this war of words and possible “bromance” between the New York and New Jersey Governors.

“I think this is a classic case where you have two people both of whom are not behaving like Republican leaders should. Governor Christie I think should follow the age-old advice that-if you don’t have anything nice to say, don’t say anything at all. He’s right, it’s routine for national political organizations not to invest in races where the candidate is very far behind,” he said.

Rooney also believes that if Astorino wants to be taken as a serious candidate than he shouldn’t make unsubstantiated allegations like Cuomo’s involvement in bridgegate.

“The Democrats in Trenton can’t even connect Governor Christie to bridgegate, so how his folks can go out on a limb and suggest that somehow there’s a bridgegate related deal between Christie and New York Democrats, that’s no less absurd,” he concluded.