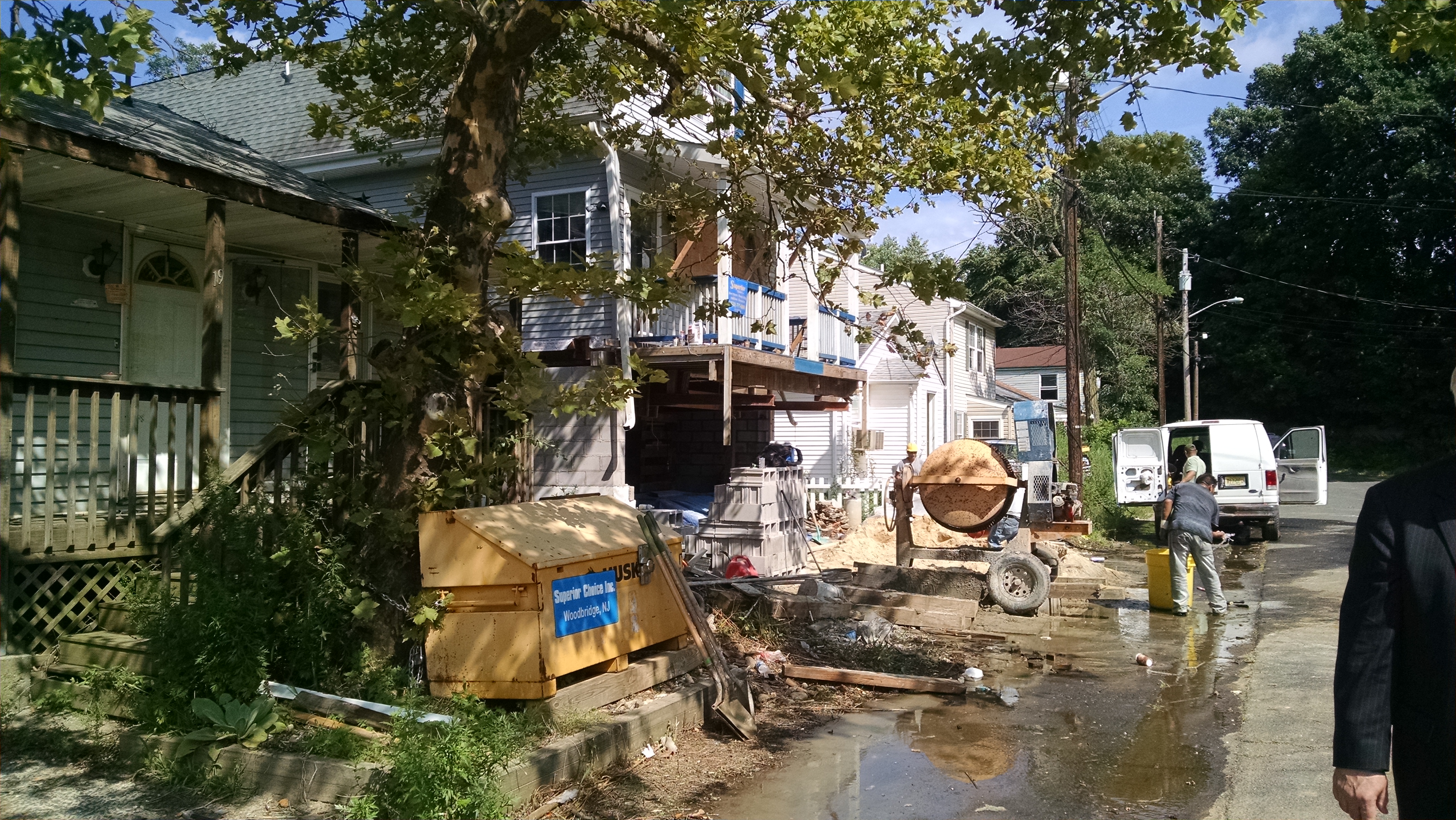 Finally, almost two whole years later, there may finally be some relief in sight for residents in Cliffwood Way, Laurence Harbor. I wrote about this small devastated neighborhood when I found it by accident in April of this year.

Click here to read my original report if you missed it, Save Jerseyans.

Back in April, I spoke with 3 homeowners upon arriving in the devastated, almost post-apocalyptic looking  neighborhood. It looks even worse than last time believe it or not, because now there are weeds taking over everywhere after months of abandonment by frustrated property owners. Amazingly, many homeowners had to simply walk away from their houses for lack of assistance or due to the slow pace of aid, something that’s hard for most of us to fathom.

Gary Soma, who saw his house completely condemned, showed Assemblyman Clifton and Congressman Pallone the inside of his house. They were amazed at how high the water level got during Sandy, and were fascinated and horrified in equal measure as Gary explained how he watched a boat flow into his basement during the storm.

I also spoke with a sweet elderly lady whose house is located two houses from Gary’s, and she suffered much of the same damage. Her story was positively heartbreaking. She and her daughter told me that they had to move from the house she loved so much into senior housing; she complains that her apartment is dark and gloomy. What she misses most is having her own house and a garden to care for. As if that wasn’t bad enough, this brave senior took a fall and broke her shoulder so, obviously, all of the medical issues were exacting an extra toll on her during this difficult passage.

It didn’t get any better as we continued our tour. Another lady relayed how she lost not only her house, but also her beautiful paid-off car during Sandy and, two weeks later, signed onto an expensive lease since she severely distressed and didn’t know if she’d be able to afford buying another car. She regrets her decision to this day.

The silver-lining? Residents were able to directly speak with officials and tell them their stories, an experience which made some visibly happy after having felt neglected for so long.

The town Administrator, Chris Marion, told me that all of these Sandy victims now have case managers and things are moving faster. Additionally, he believes they may have a buyout option by the end of September. It’s been a long road for the Mayor and local officials to get to this point. When speaking with them, I could see how much they care for Old Bridge and its residents.

Due to the long wait and uncertainty about a buyout, two homeowners have decided to forge ahead and rebuild their houses so there are now three lone houses sitting on stilts. One of those who decided to rebuild instead of waiting had owned two properties. If the buyouts do really happen, then these three homes will be the only houses standing in a neighborhood that once had 25 houses since, once a buyout happens, the state knocks down the structures and the land returns to a natural state pending further action.

After a tour of the neighborhood led by our “tour guide” and homeowner, Gary, the large group of public officials walked down a path to see the new boardwalk. I was amazed at how great it looked.

At least one resident of this storm-battered neighborhood questions what that says about the government’s priorities. Ever-brutally honest, Gary explained Senator Booker how his son had bought him a T-shirt last year with the quote “F*** the Boardwalk, What about my house?” printed on it. Gary said he is going to frame it.

We all laughed, because he’s a funny guy, but it’s truly a sad truth in many shore towns after Sandy.

The tour ended at the Bait & Tackle shop where our group visited with the owner. I looked back at the beach, the playground and the boardwalk and felt amazed at the changes since I was here last, as well as the lack of change, too. It’s a beautiful oceanfront again and, despite all the sadness some went through and are still fighting through, at least many local families have a place to gather and enjoy the Shore has they had before. I was happy to learn that the township is hosting a firework display on the beach next Saturday night.

I had hoped this would be my last article about Cliffwood Way in Laurence Harbor right before the tour began, Save Jerseyans, but since the buyout hasn’t happened yet, and given everything that I saw, you can be that we will stay in touch with the homeowners and update Save Jerseyans again in October around the two-year anniversary of Sandy. Old Bridge hasn’t forgotten so neither will we.

2 thoughts on “A Sandy Community Still in Distress, Part II”