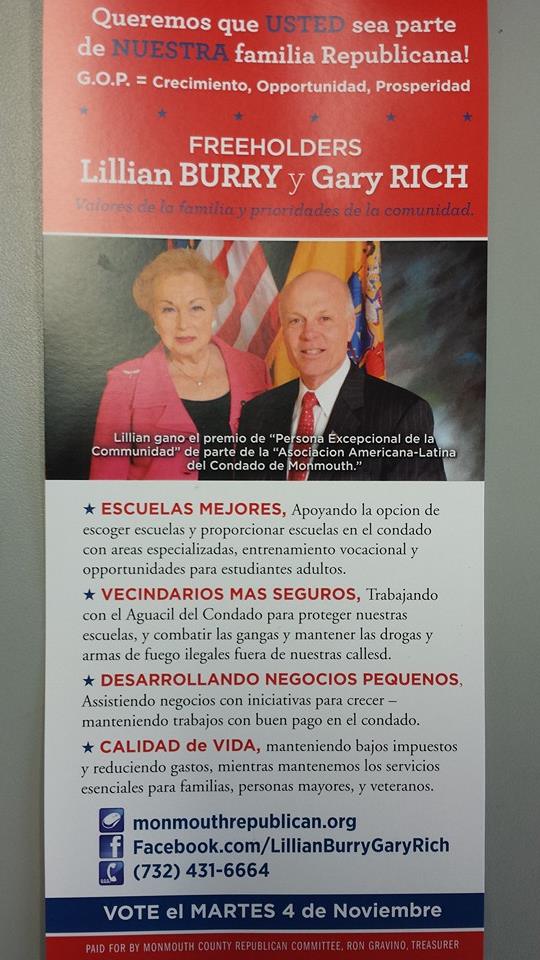 This should have been a competitive year for the Monmouth County Democrats. And it still might be for all we know, Save Jerseyans, but it certainly doesn’t feel that way if you’ve been following along.

Let’s back up for a moment. For some time now, we’ve been reading about the efforts of the baby-faced Democrat county chairman, Vin Gopal, to turn the Garden State’s northernmost Shore county blue. The numbers superficially invite his ambition. Not unlike Somerset and Atlantic Counties, Monmouth Republicans continue to generate victories in the face of significant Democrat voting registration advantages (roughly 5,000 votes at present).

Democrats controlled the freeholder board as recently as 2009 and held seats on it until this year’s incumbents, Lillian Burry and Gary Rich, swept’em out back in 2011.

Republicans have been rolling ever since. Freeholders Arnone and DiMaso coasted to re-election in 2013 with a 20-point plus victory margin. Even in 2012, an “Obama year” where the President carried the Garden State by almost 20-points, Republican Freeholder John Curley won in Monmouth by just over 10 points and the President fell short countywide by almost 15.

As I see it, several significant factors stand in the way of Gopal and his stable this cycle; here are a few of them based on my personal observations and conversations with reliable folks on the ground:

(1) The Republican fiscal record is impressive. This GOP-dominated Freeholder Boards is on its fourth consecutive year of a balanced county budget achieved WITHOUT raising property taxes. This feat was accomplished, in part, by cutting $12.5 million in spending. Monmouth is also only one of thirty-three counties in America that has maintained a AAA credit rating in these troubled fiscal times.

(2) Monmouth unaffiliateds tend to behave like Republicans in the voting booth. It’s simple math. The D’s outnumber the R’s but lose when unaffiliated voters break Republican every cycle. Points #1 and #2 are likely interconnected. The voters reward those who govern well when those who govern well can effectively make their case. The Monmouth GOP continues to do both.

(3) The Monmouth Democrat candidates lack experience and countywide name identification. There is no shortage of politically talented Democratic mayors in Monmouth: Adam Schneider of Long Branch, Jon Hornik of Marlboro, and Matt Doherty of Belmar (whose wife Maggie Moran is a lobbyist and former Corzine campaign manager) immediately come to mind. None of them ended up seeking (or getting?) the party’s backing. Did they opt out of a tough fight? Or did Gopal prefer more pliable candidates? In any event, the Democrats settled on Holmdel lawyer and 2013 freeholder candidate Larry Luttrell and former Democrat executive director Joe Grillo.

(4) Neither Democrat freeholder challenger is ready for prime time. Joe Grillo was reportedly “detained” in Neptune earlier this year for an outstanding warrant. The genesis? Nothing sexy: unpaid parking tickets. But the APP wrote a story on it where Chairman Golden offered the only point that probably matters in the court of public opinion: “[F]f your own house isn’t in order, how are you going to manage a half a billion dollar budget?” I’m also told the Dems had no clue about this skeleton until it burst out of the closet. Meanwhile, Larry Luttrell got a little crazy during a recent debate. Watch the outburst for yourself here. Art Gallagher of MMM described it as a “lunge.” At the very least, it wasn’t a reaction befitting someone seeking elected office.

(5) Vin Gopal committed an epic gaffe at a recent Democrat event, declaring his belief that Essex County serves as “a model for Monmouth to hope to achieve one day.” Talk about handing your opponents a great line! No one in Monmouth wants anything to do with Essex County, and one wonder whether Chairman Gopal has ever been to Newark?

That’s not to say that the Democrats haven’t enjoyed advantages beyond the realm of voter registration. Republicans also aren’t without their challenges. The Manalapan/Lucas farm debacle is a favorite point of attack despite the fact that there’s never been any evidence that the freeholders were ever involved.

Gopal’s young gun status in the state party has led to fundraising and political connections as well as local victories in key towns. The county itself is politically critical to any statewide campaign (and prospective candidates looking to put one together). Steven Fulop visited over the summer and Cory Booker headlined a Wall Township fundraiser over the summer, too. Joe Divincenzo even lent a hand for the freeholder ticket with  Montclair fundraiser.

What effect a weak 2014 – and a terrible freeholder slate – has on the credibility and viability of Gopal’s organization going forward remains to be seen.