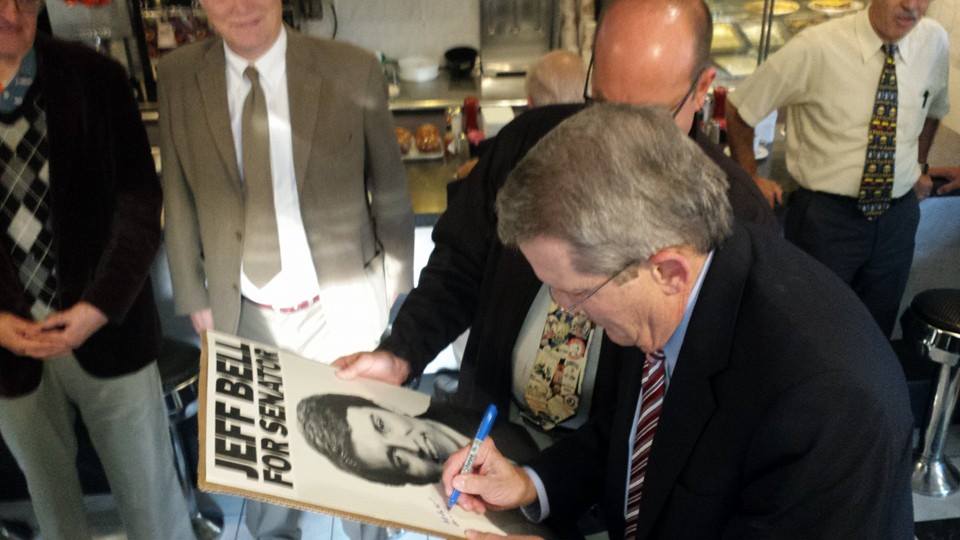 Dear Senator Booker:  Sorry to miss the chance to do this in a phone conversation, but congratulations on your impressive victory and best wishes for the six years ahead. All the best, Jeff Bell

It was a well-run campaign and impressive Booker win, though perhaps not quite as impressive as some New Jersey pollsters expected. According to final unofficial results posted at the website of the New Jersey state election division, Senator Booker got 997,331 votes to my 762,981. That translates to 55.6 to 42.5 percent, 56-43 when rounded to the nearest percentage point. That is astonishingly close to my 55-43 defeat by Bill Bradley for this same seat in 1978, which leaves me in something resembling a 36-year vote freeze.

I am proud to have carried 9 of New Jersey’s 21 counties. I added Monmouth, Salem, and Warren to the six I carried against both Bradley and Booker (Cape May, Hunterdon, Morris, Ocean, Somerset, and Sussex). Because of political polarization, demographic change, and cultural clustering, Sen. Booker carried  some of the 12 counties in which he repeated Bill Bradley’s wins by much larger margins than Bradley managed in 1978.

Needless to say, I am heartened that Republicans achieved a larger than expected congressional sweep, probably 54 to 46 in the Senate and at least 247-188 in the House. But as I said in my post-election interview with Chase Brush of Politickernj.com, it puts added responsibility on our party to develop a legislative program that can be sent to the desk of President Obama as well as help provide a framework for the crucial election of 2016.

This is a hard letter to write, because I enjoyed every minute of the campaign and regret its conclusion as well as my defeat. Still, I am proud that we won more than 750,000 votes while being able to spend just under $500,000 for the primary and general election combined, roughly a tenth of Sen. Booker’s outlays. Please don’t take this as a complaint because from the first, my brilliant first-time campaign manager Rich Danker and I sensed that the fund-raising climate was going to be extremely unfavorable for a Senate race against a popular incumbent in a state carried 58-40 by President Obama just two years ago. Rich and I decided to quit our jobs and descend on New Jersey anyway because we knew that if I didn’t run, no candidate in this or any other state would make an issue of the Federal Reserve’s disastrous six-year experiment in the systematic repression of short-term interest rates, much less the urgent need to return to a gold-backed dollar for the first time in 43 years.

I am deeply grateful to you, my generous supporters, and to my minuscule campaign team superbly headed in both the primary and general election by Rich Danker and Gia Coluccio, who as the campaign wore on found themselves outnumbered by my children, all of whom are in their 20s and all of whom (it turns out) are politically gifted.

I also owe much to the Republican primary voters of New Jersey, who in June gave me a chance to extend for five months this campaign of ideas, and to the New Jersey Republican Party led by Governor Chris Christie and National Committeeman Bill Palatucci, as well as my former primary opponent Rich Pezzullo, each of whom did a great deal to make possible the united party our campaign had behind us in the general election. As in 1978, the voters of New Jersey had an open mind to ideas the establishment said did not deserve a hearing, and our campaign made me more optimistic than ever about the future of this remarkable state and the exceptional nation of which it is a part.