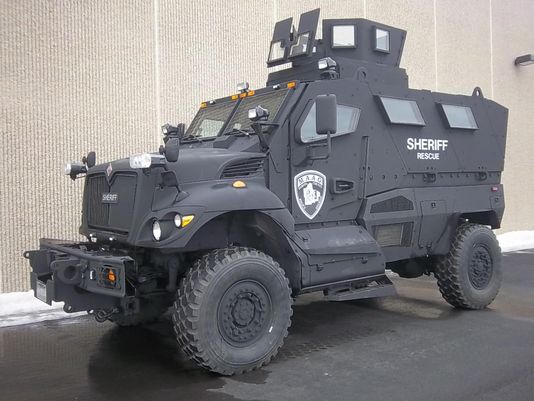 It’s time for a radical new policing strategy for communities like Ferguson, MO. Instead of sending more police in, let’s take them out – all of them and permanently.

After the grand jury determination that there was no probable cause to indict Officer Darren Wilson, who apparently isn’t a ham sandwich, for criminal wrongdoing associated with the death of 18-year-old Michael Brown, the streets of Ferguson erupted in violence and anarchy. Despite pleas (wink, wink) from Brown’s parents to remain calm irrespective of the grand jury decision, mobs took to the streets anyway to loot, pillage and burn.

Or maybe his mother egged them on, as this clip suggests (WARNING: Graphic Language):

President Obama also called for restraint, but since nobody listens to or believes him anymore, as this image illustrates, he was ignored:

There’s a strong sense that the riots in Ferguson and other cities like Oakland together with less severe disturbances in Los Angeles, Seattle and New York would have occurred no matter what the grand jury did. The decision not to indict wasn’t a reason to riot, it was an excuse.

Not too early to go Christmas stealing, especially for a big flat-screen for yourself.

New York City Police Commissioner Bill Bratton, who, to my knowledge, has no connection with the case, the city of Ferguson, the state of Missouri or anything in the Midwest, but that didn’t stop him from getting splattered with fake blood by a “peaceful” protester in Times Square during a demonstration against the decision.

At least an innocent animal wasn’t sacrificed to ruin the commissioner’s suit, so there’s that.

It was inevitable either way because the people rioting, looting, tossing fake blood or whatever are always the same ones who are bent in that direction. No matter what happens, there will never be justice, never be enough unless every single one of their “demands” are met, and then they’ll escalate them and ask for more.

Of course the master of the political-extortionist’s art, Al Sharpton, he of back taxes and liens, Tawana Brawley, anti-Semitism, ratting out the mob for the FBI and race baiting, none of which he has acknowledged, and all of which he has blamed on racism directed toward him, has to hotfoot it back to Ferguson to egg on console the Browns and the community.

If Sharpton, a man black radical Cornel West calls “decadent,” thinks the Ferguson decision is “an absolute blow,” “flawed” and “very suspect,” then maybe we should rethink policing for him, too?

Why risk another Michael Brown situation? No matter how it comes out, cops will be seen as the losers. So, remove the threat by removing the police.

Obviously, a town like Ferguson doesn’t want them there given the response we’re seeing from locals, so give the people what they want: eliminate policing in that community. If the only thing cops do is harass and kill young men in the neighborhood as exemplified by the obviously criminal behavior of Officer Wilson, despite the overwhelming preponderance of forensic and other evidence to the contrary, then withdraw them permanently and let the good folks of Ferguson fend for themselves.

Why let evidence get in the way of validating your political opportunism and bigotry or prevent you from getting a massive five-finger discount at the liquor store with the smashed window – that you smashed?

Discontinue 9-1-1 service in the town – make it such that if you call them, they won’t come since all they’ll do is harass the arsonists who’re in the process of torching the Laundromat.

And Al Sharpton – why not take the same approach to him? Free him from possible police brutality by pledging a policy of non-response to any Sharpton-related incident. No police anywhere near where he is from now on. Let him resort to self-help next time someone pulls his hair to see if it’s real.

Then see what happens and how they like it.

Are the police perfect? Of course not – there are too many documented instances of corruption, brutality and racism among them to claim otherwise. Since police officers are drawn from the community at large, they will reflect the virtues and vices of that community. But they aren’t the Gestapo on steroids, despite what Mrs. Brown and Al Sharpton would have us believe.

When a cop violates his oath, he should be held accountable – even more so since society has the right to expect him to be held to a higher standard because of his unique place in society. But Bull Connor died in 1973, and despite the protestations of some who make their living perpetuating him, his ghost doesn’t live on. And even a cop is entitled to the presumption of innocence and a fair judicial process as opposed to trial by media and lynch-mob justice.

There are a lot of things that need to be improved when it comes to policing. One that could have made a big difference in the Ferguson case is requiring every cop to wear a body camera, a policy increasingly advocated by editorialists, the police themselves, public officials and legitimate activists and advocates. Everybody cleans up their act when they know they’re on TV.

While police departments in towns like Ferguson aren’t reflective of the population, it’s more accurate to say that people in Ferguson don’t apply to become cops. As long as local residents continue to let that happen, then it’s hard to sympathize with their concerns. Being a cop in your hometown should be seen as a positive thing, one that community leaders and activists, at least the ones not in Al Sharpton’s hip pocket, should endorse.

And for God’s sake, demilitarize the police! When your local cop looks far less like Officer Friendly and far more like a Star Wars Storm Trooper, nobody feels safe or secure. The trend toward almost giving away surplus Pentagon tactical gear and vehicles to local police agencies, all of which want in on it in order to keep up with Jones City, has gotten out of hand. Enough already, because some of us suspect it will eventually be turned on us.

But in the meantime, and for those towns like Ferguson and individuals like Sharpton, if they’re so offended by not only what the police do, but also by their mere presence, then let them do without. Since there’s no amount of evidence to satisfy them, and they’re bound and determined to keep it that way, maybe the best thing to do is leave them to their own devices.

Who’s up for giving it a try?