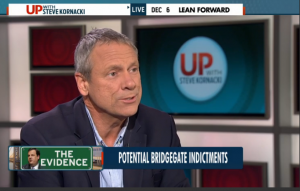 Brian Thompson, the WNBC 4-NY reporter who broke the story of potential indictments in the George Washington Bridge lane closure scandals coming next month, told MSNBC’s Steve Kornacki this morning that the likely federal charges will be related to a coordinated effort to cover up.

“This is what ties it all together as a single unified prosecution,” Thompson said, “that is they are all involved in this, they all have a finger print or more, somewhere in this, which is, what our sources are saying, all wraps up into a conspiracy to cover up.”

Thompson said that the alleged cover up started “that week of the shut downs” not a month or two months later.  Thompson reiterated that the cover up began on the same week that the lane closures occurred.

Thompson said that at least two of the principals have made a deal, are singing, or are trying to make a deal, with the U.S. Attorney.