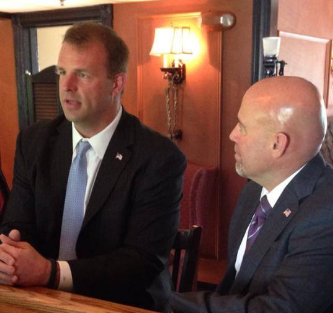 Congressman-Elect Tom MacArthur (R, NJ-3) will succeed Jon Runyan not just in the House of Representatives but, critically, on the powerful House Armed Services Committee (HASC) when the incoming 114th Congress is installed this January.

That puts him in prime position to advocate for (and defend, when necessary) the Joint Base McGuire-Dix-Lakehurst that serves as one of the major pillars of Southern New Jersey’s fragile regional economy, contributing roughly 105,000 local jobs (in and off the base) and $7 billion.

The fate of Fort Dix loomed large in both the 2014 primary and general election cycles.

“I am grateful to Speaker Boehner, House leadership and my future colleagues for this tremendous honor and responsibility. Serving on the House Armed Services Committee was a top priority for me and I actively campaigned for this assignment ever since my election,” said MacArthur in a statement. “Joint Base McGuire-Dix-Lakehurst is vitally important to our region’s economy and our nation’s military preparedness, and securing its future will be a primary focus of mine. Through my seat on this committee, I will also be a forceful advocate for policies that seek to achieve lasting peace through military strength and be a strong voice for the large concentration of veterans that call our region home.”

“Tom will be a great advocate for his local communities, and he brings an impressive resume to the Committee as a thoughtful problem solver,” the Texas Republican continued. “I look forward to working with him in January.”