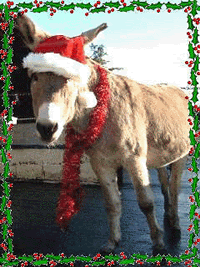 This song, recorded in the 1960s by Lou Monte is one of those ethnic, holiday, novelty songs that people have long since forgotten about. The song was written by Raymond J. Albanese, known professionally as Ray Allen. Among his other hits was “Peppino The Italian Mouse.”Many of these types of songs were full of stereotypes but this was in an era that predated political correctness.

The lyrics include these lines: “When Santa visits his paisons, With Dominick he’ll be. Because the reindeer cannot, Climb the hills of Italy. ”

Thank goodness, Americans of Italian descent have moved well beyond Dominick The Donkey and similar creations. But today, even though we boast two members of the United States Supreme Court, we sometimes seem to be stuck with far worse stereotypes, such as those in “The Sopranos” or (dare I mention it?) Jersey Shore.

So, looking back on it, Dominick was really rather innocent — especially in today’s world where the culture has been so coarsened.

3 thoughts on “The Story Behind Dominick, The Christmas Donkey”