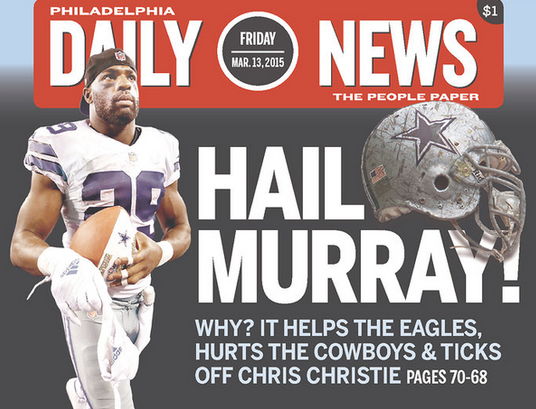 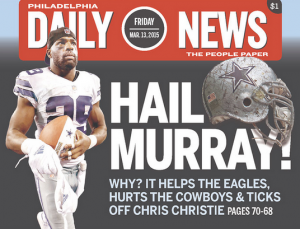 Governor Chris Christie may well recover and pull of an historic GOP primary upset next year, Save Jerseyans, but he also may not want to count on support from Eastern Pennsylvania.

That bridge (pardoned the bad pun) is closed. For the time being.

Following news that the Philadelphia Eagles had acquired star running back DiMarco Murray from the Governor’s Dallas Cowboys, Philadelphia media/sports fans (see Exhibit A on the right) are resurrecting the rivalry and getting some shots in. To be fair, Gov. Christie threw kindling on the fire by calling Eagles fans “the worst in America” back during the playoff season.

.@DeMarcoMurray, welcome to Philadelphia — hope you get across the Ben Franklin bridge before @GovChristie tries to close it!

That was Kenney’s only civil comment. It got worse from there.

What’s happening at 30,000 feet on the Christie campaign? Read this Politico piece. The buzz word: patience. Something Chip Kelly critics don’t value! We’ll see if Christie donors are any different.

One thought on “Eagles’ Murray acquisition elicits jabs at Christie”