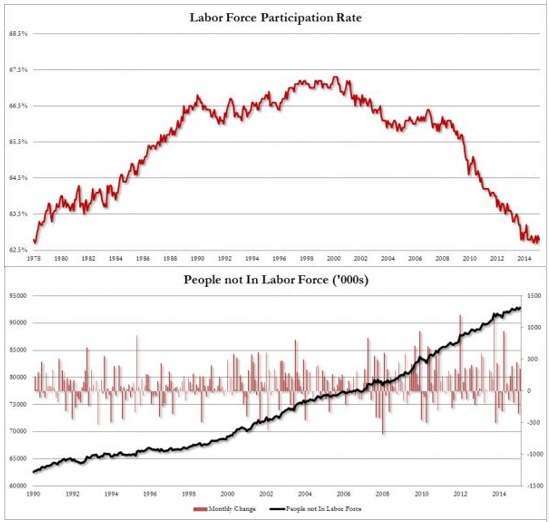 Oh, happy day: the unemployment rate is down to 5.5 percent, the lowest it’s been since mid-2008. Praise be to Obama, the father of all such wonders! Or not, if you toss back the Wizard’s curtain revealing a humbug manipulating data to make a bad situation look rosy.

Numbers are tricky things. We need them to measure progress that otherwise can’t physically be seen, so we collect and analyze data. Numbers tell us if a company is doing well or poorly, they tell us if the population is rising or falling – they tell us a lot.

It’s in the analysis where you find the devil lurking, and that’s where government unemployment figures mislead.

The unemployment rate isn’t calculated by looking at the unemployed. It comes from the Current Population Survey, a U.S. Census Bureau monthly review of 100,000 households in the U.S. During the survey, Census Bureau staff question participants on whether they’re working, their job-search efforts and the like. The Bureau admits that its conclusions differ from what they would be if an actual count of the entire population had taken place.

Furthermore, the word “unemployed” is subject to definition. According to the Bureau of Labor Statistics, the agency of the Labor Department that issues employment pronouncements, there are four categories of people:

All well and good, but what if you’re among the long-term unemployed, many of whom quit looking for work out of discouragement? According to government number crunchers and for purposes of the labor force, you don’t exist – it’s as if you became zombies on The Walking Dead.

What if you’re technically “employed” but in a part-time job several rungs lower on the career ladder than where you were before becoming unemployed? The government sort-of looks at you then.

Taking the “sort-of” first, BLS has several “unemployment” numbers, with the one we hear the most – the “official unemployment rate” – referred to by insiders as the U-3, or the “total unemployed as a percent of the civilian labor force.”

If you lose a full-time job paying $100,000 per year, are out for a time and end up taking a part-time, minimum wage position to make ends meet the government says you’re “employed.” To the BLS, all jobs are equal even though in reality some jobs are more equal than others.

Accordingly, and probably begrudgingly, BLS has the U-6 rate that measures the underutilized or the “total unemployed, plus all persons marginally attached to the labor force,” including unwilling part-timers and those hanging on by a thread. The Feb. 2015 U-6 number puts the unemployment rate at 11 percent.

You never hear the Obama administration mention that a more honest jobless number is 11 percent, do you?

But when we get to the total population, which BLS for the most part ignores, it gets worse, far worse.

The Labor Force Participation Rate is the percentage of the labor force – again, the employed plus the unemployed who are looking – as it relates to the overall population. To many it’s what you should look at to get the most accurate measurement of how things are going on the jobs front. Unless you know what to look for, however, the numbers are hard to find. And these days, the numbers are white-knuckle awful.

According to the BLS, the Labor Force Participation rate dropped to 62.8 percent, the lowest it’s been in 37 years. That’s well over one-third of the potential adult workforce in the U.S. both not working and ignored for unemployment purposes.

As the graph shows, you have to go back to the Carter administration to see numbers this bad. And the steady uptick of millions of people not in the labor force translates into millions of paychecks lost, unproduced output, broken lives, broken families and shattered dreams.

Praise be to Obama, the father of all such wonders!

ZeroHedge.com is an excellent site if you want to keep track of the participation rate. Here’s what it said a few days ago, putting it into real numbers:

You can fiddle all you want with employment data to make it look good when you ignore 93 million Americans and toss 354,000 each month, or thereabouts – in Dec. of last year, the number was 451,000 – out of the workforce. At that rate, you can get the unemployment rate down to zero by kicking more and more people out of the workforce all the time.

It’s not out of bounds to argue that the entire drop in the unemployment rate from its Great Recession high of 10 percent in Oct. 2009 is due to statistically kicking those who are, by definition, no longer looking for jobs, out of the labor force.

Some say the reduction is no big deal because it’s due to retiring Baby Boomers getting fat Social Security and Medicare benefits. The problem is the Boomer percentage of the labor force wasn’t that large to begin with. If anything, because of the Great Recession and the necessity to pay the bills, older Boomers want back into the workforce in increasing numbers.

But let’s say we used the Labor Force Participation Rate in effect when the recession officially ended, as one source did. Put all the people the government kicked out back in and you come up with a U-3 rate – that’s U-3, not U-6 – of 9.9 percent. By any standard, that’s a terrible, election-losing number. No wonder they keep kicking people off the roles.

Face it: this is a jobless recovery, and it has been since 2009 when the recession was declared “over.” It’s also got other disturbing numbers and news belie the official stats:

And so it goes.

Ask around: does this feel like an economy where good-paying, family-wage jobs abound? Or is the guy you know who used to make $60,000 per year in a full-time gig now working part-time as a checker at Target or the local grocer?

Of course, cooking the unemployment-data books isn’t new. Nothing gets America’s attention more than jobless numbers because they hit every bread winner and dual-income family right where it hurts. So, it’s in every politician’s political interest to paint as pretty a picture as possible.

But nobody who toils in the weeds of this stuff  ’s the unemployment rate because figures lie and liars figure.

Praise be Obama, who built this house.