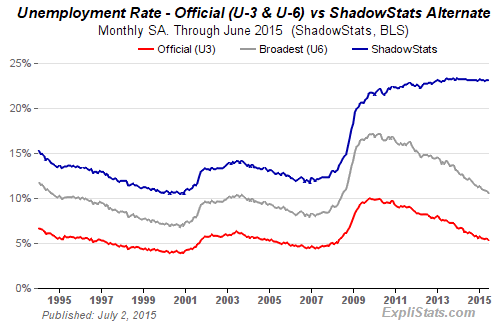 Progressives, liberals, socialists, Democrats  and the media (one and the same?) who crow about the current “low” unemployment rate never want to admit that the reason it’s gotten to 5.3 percent — the “official unemployment rate,” or U-3, as reported by the Bureau of Labor Statistics — is because the bureaucrats at BLS and the politicians in the White House artificially have tossed millions upon millions of long-term, out-of-work Americans off the roles by arbitrarily declaring that they’re “no longer in the labor force.”

There are lies, damned lies and government unemployment statistics. I’ve written about this before, but you can never have enough economic bad news, especially on the eve of our national birthday.

The more accurate U-6 rate, which is what economists look at for unemployment numbers and includes those marginally attached to the workforce, has the unemployment rate at 10.5 percent. But even that is too optimistic.

There are some – count John Williams at ShadowStats.com and me among them – who contend that the REAL unemployment rate has to include EVERYBODY, not just those the government wants included and did, until 1994 when they rigged the way the numbers were calculated to exclude the long-term unemployed.

That unemployment rate – the REAL rate – is 23.1 percent, a number that, unlike the U-3 and the U-6, hasn’t significantly gone down in over two years. At its highest in 1933 during the Great Depression, the unemployment rate was at 25 percent.

While Williams is not without his critics, they focus more on his terminology and harping about the edges of his calculations rather than his central thesis that a whole lot of folks who should be counted as in the labor force aren’t being counted.

Adding insult to injury, whatever job creation we’ve seen has been in low-wage and part-time positions.  Mid- and higher-range positions are down some 1.2 million since 2009. When you go from making $75,000 per year on a full-time basis to making $7.50 per hour on a part time basis, most people consider that to be a severe hit, but the federal government considers it a net win – after all, you’re working, aren’t you?

A record 94 MILLION Americans are no longer considered as being in the labor force. That’s substantially greater than one in three, resulting in a participation rate — the total of Americans working or “looking” for work — of 62.6 percent, a number not seen since the worst days of the Carter administration.

To illustrate graphically, here’s a comparison of the U-3, the U-6 and John Williams’ ShadowStates Alternate rate that factors back in the workers the government has kicked off the labor force roles:

Consider: Even with a margin of three to five percent unemployment, which would encompass workers in between jobs or otherwise transitioning, which some are always doing, well over one-third of all Americans who should be working, could be working and would be working if the government had any business sense about it are not working.

Net, net, net: Continuing  and accelerating economic stagnation and deterioration, zero wage growth, sluggishness and that brother-in-law of yours who’s been out of work since the fourth season of Breaking Bad will still be sleeping on your couch, eating your food and drinking your beer for as far as the eye can see.

When some left-wing loon posts one of those stupid “Obama’s so great — he’s lowered the unemployment rate” bumper-sticker memes on Facebook, show them this post and ask what other lies the administration and its lackeys and toadies are telling?

The numbers…always look at the numbers.

Brother, can you spare a dime?