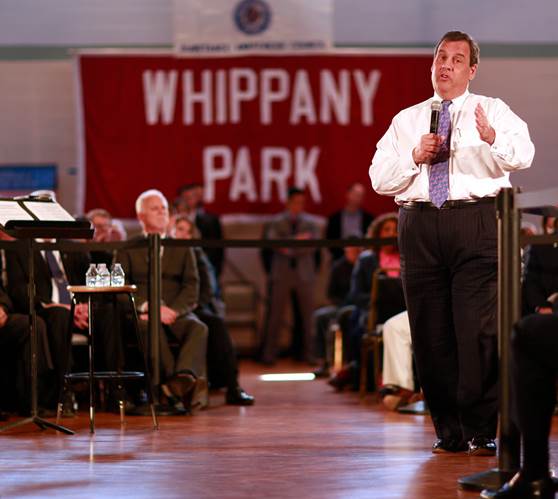 Here’s a taste of what you missed:

Governor Christie: So listen, I’d love to be the Governor during a time when there’s so much money coming in over the transom that I’d just saying yes to everybody. You want a new program? Yes, absolutely. You want more money for this? Sure, why not? I’d love to do that. That’s not the time that I’ve gotten to be Governor. And I’ve got two and a half years left. Two and a half years left. Here’s the good news for that, for those who didn’t vote for me that’s really good news and for those who did, the really good news about that is I’m never going to appear on the ballot in the state again so I don’t have to worry about not telling you the complete truth. This is it. I want to fix this problem on my watch.  I want to get it done. We started in 2011, we need to get it done now. If we do, we are giving an incredible gift to our children and grandchildren. If we don’t, we are going to be the generation of New Jerseyans they blame for the destruction and perhaps the bankruptcy of this state. I don’t want to be a part of that and I don’t think most of you do either. And so that’s why I’m talking about this stuff. That’s why I’m doing town hall meetings every week between now and June because I want you all to understand what this problem is. This isn’t about blaming anyone. This isn’t about blaming the unions and their members. It’s not about blaming the politicians of the past. It is what it is. It’s already happened. There’s nothing we can do to change it. Now we have to fix it. And guess what it’s not just in my interest to do it, it’s in the interest of those union members to do it too because if they don’t – there won’t be a pension. There will not be a pension for them to have. And many of them have planned their entire retirement around it. It’s not fair to them either but they’ve got to be part of the solution.

Question: Hi Governor, my name is Brian McClain. I’m the local shop steward here in Hanover Township so I feel as though that’s a fair way to start and let you know where we’re coming from.  So we feel bad for you, initially, because of your analogy. You did get left with the check. And if you talk to some of my colleagues. The five predecessors belong in jail because they never  kept the promise, ok? When the majority of my guys took these jobs they said, the old saying was you’re never going to get rich working for the public, ok, but you’ll always have your benefits to be able to take care of your family when you retire. We acknowledge you’re getting killed because of Sandy. A lot of different outside things have beaten you up, but my guys asked me to ask you today so I hear it right from you so I can go back and answer the question to them, if your team put in place this plan to get us out of this, they want you to make the payment, so they want to know why from your perspective and out of your mouth—you know, we understand there’s outside things coming at you in a lot of different ways but I want to be able to hear it from you, you know, as to securing my guys going forward.

Governor Christie: Sure, yeah. We don’t have the money.

Governor Christie: Like listen, we simply don’t have the money, and I’ve told you what we need to get the money, so if folks want me to raise the sales tax to 10% or want me to raise the income tax on every working New Jerseyan by another 29% and if you think that what ultimately will happen will be that people won’t evacuate this state like their clothes are on fire, which will create an even bigger problem for us, that’s the only way you do it that way. The only other way to do it is say listen, those promises that were made, and by the way were also demanded by the union leaders.

Question: Well we felt we won it with collective bargaining.

Governor Christie: Of course, yeah, right, with political muscle behind it. I mean let’s be honest, OK?

Question: It goes two ways though.

Governor Christie: Listen, I understand, but all you and I have done over the course of the last couple minutes, me well before you, was to blame my predecessors, and they deserve blame, but let me tell you something else: your union leaders too knew that it wasn’t getting paid for. It wasn’t like they thought, oh well, there must be some secret stash of money somewhere where they’re going to pay for this stuff, but they wanted to take the political victory lap. There’s politics on both sides. They wanted to come to you and say guess what? We just got you n/55 on your pension. How about that? Aren’t we the best? Guess what? We just got your health benefits increased. You get even better benefits now and you don’t have to pay any more. Remember, when I became Governor, most public workers, not all but most, paid nothing for their health insurance, nothing.

Governor Christie: Listen, great, great, but you’ve paid a minimal amount, the amount that went nowhere near what your real share should have been. Remember something: the judges in this state, up until I changed it, paid 3% of their salary for their pension. You think that comes anywhere near to paying for a 65% of highest and best salary for a pension? We increased it to 12, and still it doesn’t pay for everything that they’re going to get, and the teachers were down at 5. It doesn’t pay for a benefit when you’re going to live as long as we’re living now and it’s going to be as large a pension as it is, so yes you always paid into it, and by the way so did most localities, most local governments, which is why the police and fire system is in better shape than some of the other ones, because localities have paid in, but even so they’re at about 70 to 75% of funded value and the localities have made all their payments and the officers have made all their payments, so what does that tell you? It tells you that the benefits, even when everybody’s making their payments, don’t add up, so what I’d tell your guys is people didn’t tell you the truth who you were counting on to tell you the truth, and the fact is over the last three years on the deal I made there were $6 ½ billion of payments that were due and owing. I’ve made 4.2 billion of them. OK.

Question: And we thank you for that.

Governor Christie: And listen, my obligation is to make every nickel of the payment I could and if I had the money today and if I run a surplus beyond the surplus that we have in the budget I’m going to put every nickel into the pension system because it’s an obligation that we have, but I can’t print the money, so what I’d go back and tell your guys is this: there’s a choice to be made now, and part of the plan that I didn’t go through in all the detail is I would take all pension systems out of control of the government and turn them over to the unions. We have $80 billion on deposit in the state pension systems, 80 billion. I would take all of it and turn it over to the unions and say you now manage these for your members. Take it away from the politicians. Take it away from them. Don’t let them dip into it. Don’t let them shortchange it. You take it and you control it from now on, because they’re the ones who are most responsible to you and the ones you pay dues to to run things. That’s another part of the plan that I didn’t mention before. I don’t have any interest in being involved in this, but now I have to fix it, so I appreciate that you acknowledge that I got left with a pretty bad deal here, but you know what? As my wife reminds me often when I complain about this, no one put a gun to my head, right, to take this job. I did this voluntarily, and so—but I want to fix it, but you got to be honest with your guys and I’ll be honest with you all here. Some of the firefighters may remember I came to the firefighters convention five years ago, four or five years ago, and I walked in in Wildwood and they booed the hell out of me because I was suggesting the first round of changes, and in essence what I said to them up there is listen, I understand you’re angry and I understand you’re betrayed and feel deceived and the reason you do feel that way is because you were, and you can boo me all you want, but in the end I don’t understand why you’re booing the first guy who came here and told you the truth rather than the folks who told you and whispered sweet nothings in your ears for decades and stuck it to you just to get your vote. The easiest thing in the world for me to be would be to say don’t worry about it. We’ll fix it and it will all be fine. You know, don’t watch over here. Look over here. Let me distract you a little bit and then I’ll be gone and I’ll be one of those guys. I don’t want to be one of those guys. I want to be the guy who you may say, he’s an SOB. I can’t believe what he’s doing, but ten years from now when your pension’s there you look up my address on the Internet and send me a thank-you note.