Trenton’s Pension Death Spiral is Starting All Over Again

After Governor Christie’s dramatic, pension-centric budget speech, Save Jerseyans, I thought it was time to take a step back and update my history of Trenton’s pension “death spiral” with a little extra context.

There are 50 states that are more than $4 trillion in debt, and New Jersey is among the worst offenders (California being rated the most indebted state, with New Jersey ranking fourth behind only New York and Texas).

We are spending more than three times what we are taking in! No citizen could expect to survive that way when it comes to his or her personal finances, and yet those elected officials we put in office are running the state with that kind of reckless mentality.

The exodus of businesses and citizens from New Jersey results in even less revenue to cover these mounting legacy costs.

The pension and other post-retirement obligations rose from $38.2 billion in the fiscal year to $43 billion. Debt from bonds increased from $41.5 billion to $41.8 billion (and don’t forget the general obligation debt that stems from bonds approved by the voters of $2.2 billion). In addition, the state has added more than $2.7 billion in new debt which will be reflected in next year’s debt report.

To fully fund the pension system this year would have cost the state $3.9 billion, but in order to balance the budget, but as you will recall, Governor Christie cut the contribution to just $681 million.

However, New Jersey’s Superior Court ruled the state had to make the full required payment into the system, setting the backdrop for Tuesday’s budget address. Expect more legal wrangling on this point.

I had stated in a prior article ‘The History Behind Trenton’s Pension Death Spiral‘ that Christie is going to be made out to be the bad guy here, and that he needs to come up with a pension reform plan to correct decades of mismanagement from both parties. Democrats will make him the scapegoat or the fall guy for the failure of their party to do something when they had the chance. They kicked the proverbial can down the road and now look to place the blame on anyone but themselves.

The private sector had learned to do more with a lot less during the recession, and there is no reason the public sector can’t do the same; there is plenty of unnecessary spending in the state budget as well. The long-term debt, post-retirement pension and health benefits will become unsustainable and the system will collapse eventually if spending and borrowing isn’t curbed. However, without tax cuts, too, these fiscal realities will affect not only New Jersey’s residents but will also make our state even less attractive to its business sector than it already is at present.

Governor Christie and others say that without significant changes to the system, the state faces a pension crisis, with pension promises far outweighing funding for future pension payments.

Guess what? The crisis has arrived! It never truly left. It’s been building… 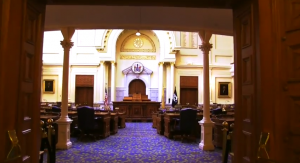 Now seems as good a time as any to buckle down and make those significant changes, stop playing the blame game, and take responsibility. We, as a state, cannot take more money from the pockets of those who can least afford to give more to make up for the mistakes of our past representatives. The real problem, at present, is reluctance on the part of our leaders to tackle unnecessary waste. It’s easier to raise taxes than resolve the crisis of their own creation. They will pat each other on the back every time a quick fix is enacted but you and I know it’s just more of what got us here in the first place.

Governor Christie thinks he has a new plan (or at least the beginnings of one) to build on his first term pension reforms.

A further complication: contrary to what Gov. Christie said in his address, the NJEA says there is no agreement on the substance of a “road map” pitched by the Governor during his Tuesday address. It appears as though, from the surface, the Roadmap for Reform has already taking a wrong turn. NJEA President Wendell Steinhauer claimed to have no clue what the Governor was talking about. Steinhauer emphatically stated, “We have not agreed to any changes to pensions or health benefits. We have only agreed to continue looking at all solutions that may provide our members with more stable pensions and affordable, high-quality health benefits.” It sounds as if the NJEA is not willing to make any concessions other than adding to what they already have.

Again, we’re waiting on meat for the bones.

And on the tax front, which got almost not attention on Tuesday, Gov. Christie did NOT address the gas tax as part of his general refusal to consider tax hikes; for now, our reality is that the existing increase is only postponed, Save Jerseyans. And even though we did have 115 tax increases from the previous two administrations, there was nothing said about cutting any of those taxes.

History is starting to repeat itself. Pensions and the TTF, somewhere along the line, will come back to bite all of us. The residents of this state are about to get another memo ‘tightening of the belt,’ but it is always for the benefit of the state coffers, never on the side of the people. Just as the public workers feel like they were taken over the coals with empty promises, the private sector is being taken over the coals as well. Someone has to pay either now or later.

The worst part? If nothing is done now, and the economy eventually recovers, our leaders will once again become complacent, riding temporary upticks in tax revenues, and the cycle starts all over again.

New Jersey does not have a revenue problem, it has a spending problem. Our elected officials need to start acting accordingly.