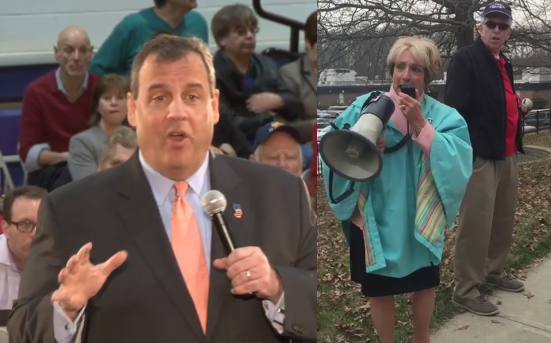 So much for that historic roadmap concord…

Here’s a taste of what you missed from Town Hall #134 on Tuesday, Save Jerseyans, on the same day that New Jersey’s highest court agreed to hear a key pension appeal:

Governor Christie: Cause I get people who yell this at me all the time. How much is your pension going to be? Cut your pension. Let me make it clear to you. I don’t get a pension. The governor in New Jersey does not get a pension. Members of the legislature do by the way. That’s interesting. They make the laws. They say no pension for the governor but pensions for us. That’s good. But I get no pension so I have a 401k plan with the State. I put a certain amount of money in out of my paycheck every two weeks. The government matches a small amount and then when I leave the governorship I get to take the money with me. So it’s like most of you do who have a job in the private sector. That’s the way retirement works now. That’s why we save for retirement now. So, first thing freeze new membership in the pension system. Second, is in order to make the pension payment let’s bring that health care coverage down from platinum plus to gold. At every level government from municipal government right up through the state government. if we did that we’d save $3 billion a year. You take that $3 billion and you apply that to the pension system, which will bring that payment then up to $4.5 billion and you pay off that payment over time. And it would not require increasing taxes on the people of New Jersey. It would not require us to drive more jobs and more people away from here. And the folks the public sector still get a gold level of public health insurance and unlike what some folks will yell at you there’s no cutting off the pension, they get the exact pension they were promised and it doesn’t increase their payment to the pension.

1 thought on “VIDEO: Christie duels with NJEA in Matawan”