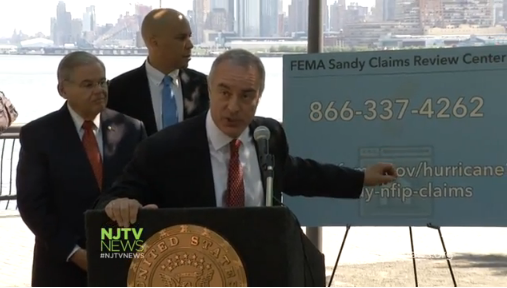 Brad J. Kieserman, the federal official assigned to reform the National Flood Insurance Plan and to re-open thousands of Superstorm Sandy related claims amid allegations that thousands of homeowners were short changed, has resigned his post in order to take a job at the Red Cross, according to a report on Newsday.

A 28 year employee of the federal government, Kieserman took on the reform of NFIP only 3 months ago in February. FEMA annouced four months ago that it would settle every disputed case but only about a dozen checks have been issued.

Appearing in Hoboken last week with U.S. Senators Bob Menendez and Cory Booker, as well as Highlands residents Kerry and Jamie Gowan who where representing the 70,000 New Jersey residents with claims to be reviewed by FEMA, Kieserman pledged that the government would do better in the tasks of “people caring for people.”