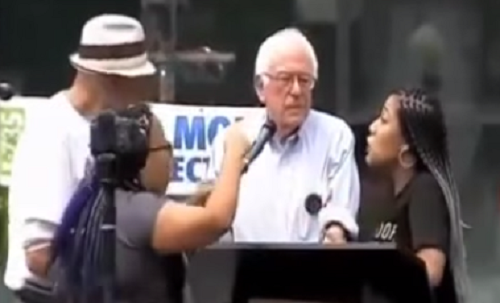 The public humiliation Bernie Sanders received at the hands of two #BlackLivesMatter stage crashers in Seattle is all the proof anyone needs that he is not qualified to be president, Save Jerseyans.

In town for a couple of campaign stops, one at a Social Security and Medicare rally in the heart of the downtown shopping district, the Vermont senator was about to speak to the assembled throng of 5,000 people when the two agitators bum rushed him on the platform and hijacked the event, as shown in this raw footage from Seattle’s CBS affiliate:

“If you do not listen to her, your event will be shut down right now,” screams one of the diminutive women, who then, with her partner in crime, proceed to make it happen. What a complete circus!

Watching Bernie bumbling about the platform was like watching Uncle Billy trying to make the Bailey Building & Loan Deposit at nasty Mr. Potter’s bank in It’s a Wonderful Life. Both of them looked identically dazed and confused you wonder if they aren’t from the same gene pool.

Sanders later appeared before 15,000 people in a different, and highly controlled, setting at the University of Washington where you had to pay to get in.

Of course, as soon as he could, he was all over the Black Lives Matter issues with a manifesto incorporating every demand, every point and every grievance the two women humiliated him in expressing. Call it public policy by mob violence.

When you’re on the presidential campaign trail, you need to anticipate trouble and have a plan to address it, especially when you’ve seen it before as Sanders had when he and former Maryland governor and Baltimore mayor, Martin O’Malley, were heckled by Black Lives Matter activists at last month’s Netroots Nation soiree in Phoenix.

Without a phalanx of muscle men ready to stand between you and the troublemakers to hustle them  off the stage – discreetly, of course – expect it to happen over and over and over again. Appeasement doesn’t work on the street any more than when you’re selling out to Iran.

It’s like going up for rebounds in the NBA: a lot of hands reaching for the same ball and elbows aiming for noses with the toughest and most determined being the one who comes down with it. Right now, Bernie Sanders is playing 7th Grade JV ball where there’s more crying than anything else. Another three-second violation, Sanders!

Bernie may be stuck in the 7th Grade forever. If he can’t protect a platform stage and a podium from a couple such as these, he’ll get pantsed by Vladimir Putin or have a broom handle shoved up his you-know-what by ISIS.

Not for a minute would Hillary Clinton and her people tolerate such shenanigans. If anything, she’d double-down on revenge. In 2008 while she was still battling President Obama for the Democratic presidential nomination, then-Sen. Ted Kennedy endorsed Obama reportedly causing senatorial colleague and current presidential contender, Lindsey Graham, to jokingly ask Kennedy if he could inherit his prime office space, “Because the Clintons are gonna kill you” for the betrayal.

But, ladies and gentlemen of the progressive left, this is how your politics operate: Hand-wringing angst and mea culpa white privilege guilt trips followed by even angrier demands that those on the hustings further degrade and humiliate themselves. And they say the Republicans are bonkers!

In a post mortem on the Sanders event in Seattle’s “alternative” newspaper, The Stranger (it’s become less alternative and more Seattle mainstream, which tells you something about the state of that town), progressive state Sen. Pramila Jayapal penned an angst-laden, breast-beating , 1,700-word “analysis” of what went wrong. In a nutshell, she blamed it on people who weren’t there: the establishment white power structure. But in Seattle that doubles as the progressive political power structure that has run the city and much of the rest of the state for nearly 50 years, so I guess they were there – she just didn’t realize who she was describing.

Her solution? “Open our hearts to all of the pain and suffering in the world and be as compassionate and kind as possible to each other so that we can also heal as we learn and listen,” and “Call out even our white loved ones, friends, allies for what they are not doing.”

Not a word about growing up, taking responsibility for your own behavior and denouncing bullies in your own caucus.

They call it analysis paralysis: Nothing can happen so long as a noisy segment of the constituency objects or declares itself offended. Sanders can attract huge crowds – right after Seattle, he drew 28,000 people in Portland, OR, while Hillary Clinton’s largest to date was 5,500 people – to hear a thunderous oration promising a higher minimum wage, expanded Social Security and free college while lambasting the evil “rich” who will be robbed to pay for it all, but when push comes to shove it’s what Gov. Chris Christie said of Sen. Rand Paul’s detached analysis of national security: “ When you’re sitting in a subcommittee just blowing hot air about this, you can say things like that.” Ditto a stump speech.

When confronted with two small, noisy women – or by Russia, China, Iran or another rogues’-gallery nation – he must act decisively and with purpose, even if it means improvising as events unfold. Instead, they got in his face and he was paralyzed, conceding the stage to aggressors. The take-away is Bernie Sanders is a pushover who can be rolled.

Man up, Bernie – you’re not in Vermont anymore.