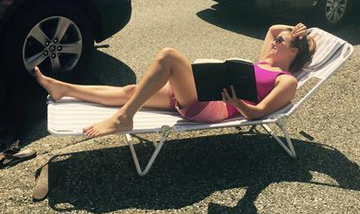 Turnpike craziness isn’t anything new, Save Jerseyans, but it isn’t ordinary for the entire darn thing to back up! But a dump truck fire and possible resulting infrastructure damage have left traffic stopped (not snarled or slowed… STOPPED) at Exit 13 of the nation’s most heavily-congested stretch of interstate:

Tpk diversions to remain for a while as overpass is assessed. Expect delays thru evening rush. pic.twitter.com/IRl2hfHW6t

BREAKING: Truck fire has NJ Turnpike CLOSED in both directions near exit 13A in #Linden #nbc4ny pic.twitter.com/j9r7HAaX1S

The resulting sights and sounds are… unusual:

Lounging on the NJ Turnpike. Making the best of it waiting out the crash in Linden NJ #Linden pic.twitter.com/udEbOacwrh

@News12NJ People playing baseball on the turnpike while waiting out the crash in Linden NJ #Linden pic.twitter.com/jZrLiZxXZJ