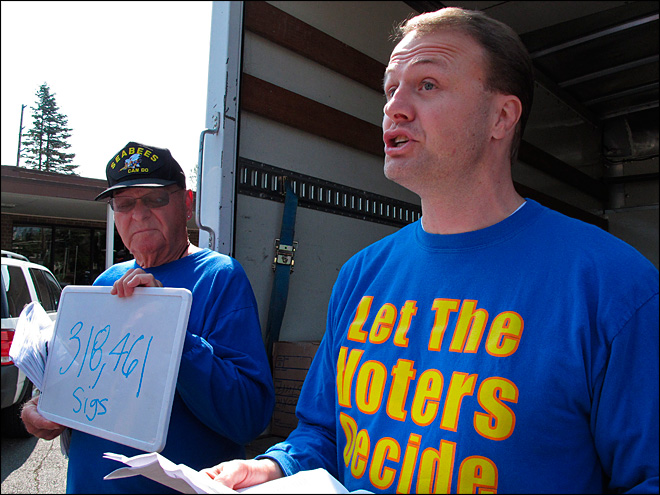 New Jersey desperately needs two things: someone like my good friend, ballot-initiative guru Tim Eyman, who has saved Washington state taxpayers well north of $32 billion by shoving the political stick of tax-cutting popular sovereignty in the eyes of state government special interests and the initiative and referendum process to be turned loose on the ruling political class. 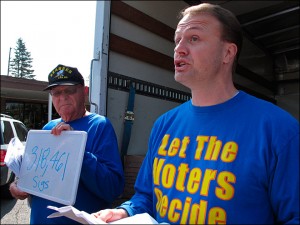 I’ve mentioned Tim in Save Jersey blog posts before. I’ve known him personally and covered him (here and here, among others) for many years, for which I was hated by leftwing progressives, welfare grifters, government leeches and their fellow travelers.

He’s the master of the initiative and referendum process – the fourth branch of government in the 36 states where citizens have the right to self-legislate – in Washington state, with a success rate with voters approaching 50 percent, sometimes going deep into personal debt to finance ballot measures.

Defying conventional wisdom, Tim eschews social media, has a bare-bones website and relies mostly on volunteer grassroots organizing, email fundraising blasts and paid signature gatherers. He represents what political activism should be: the power of an individual to organize the like-minded to take on vested special interests and the powers that be to beat them time and again at their own game. He’s an all star in my political book. Not bad for a watch peddler from Mukilteo (Muck-ul-TEE-o).

That New Jersey politicians and party bosses don’t trust the people enough to let them directly legislate is to the state’s everlasting shame. That efforts to enact I&R in the state appear to be moribund to the point of non-existent is a black mark against citizen activism and participation. But I digress.

Tim’s latest coup is qualifying Initiative 1366 for the fall ballot that will, if passed, force the Washington State Legislature to either submit a state constitutional amendment to the voters requiring a two-thirds vote of both houses before taxes could be raised or face a reduction of one cent in the 6.5 percent statewide sales tax, a move that could reduce state revenue by $8 billion over six years.  The term “over a barrel” comes to mind.

May I see the hands of Save Jerseyans who wouldn’t like to see the New Jersey Legislature’s hands so tied? Seeing none, the resolution passes.

I-1366 came as a response to 2013 decision by the Washington Supreme Court that invalidated Tim’s most recent two-thirds-vote initiative. The court held that the state Constitution precluded a citizens’ initiative from enacting such a rule. Those of us in the tax-cut, popular sovereignty movement regard that decision as a chisel, especially since the plaintiffs who initiated the litigation read like a who’s-who of big government, big labor and big-welfare-state interests.

Efforts in the Legislature to pass a constitutional amendment reinstating the two-thirds rule that would be sent to the people went nowhere, so Tim, as he often does, took the bull by the horns with I-1366 and easily qualified it for November’s ballot.

Not surprisingly, long-time opponents of Tim’s efforts sued to have the initiative removed from the ballot claiming it’s an end-run constitutional amendment. Washington courts have historically refused to rule on the validity of ballot measures before they’re voted upon. But plaintiffs, desperate to block Tim, will pull out the stops, even running up the McCleary Decision flag (Washington’s equivalent of Abbott Schools) to try to get taxpayers to salute. The problem is, however, state voters have also turned thumbs down on that kind of appeal to have their taxes hiked.

May I see the hands of Save Jerseyans who would be pleased to have the Abbott Decision constitutionally and fiscally gutted? Everyone seems on board.

The initiative – direct legislation by voters – and referendum – submitting a legislatively enacted measure to a vote of the people – process in the Evergreen State dates back over a century. They were added to the state Constitution as a voter-approved amendment in 1912. Initially seen as a tool for the people to hold railroad special interests in check and to enact progressive (Teddy Roosevelt-style progressive) legislation, today I&R effectively hold in check big-government special interests and those dependent upon it.

Sure, not all initiatives are humdingers or make good policy sense. In 2004, an Eyman-hater floated one to have him declared a Horse’s Ass. A superior court judge wisely ruled that it wasn’t a proper subject for an initiative, so the effort morphed into the state’s nosiest and most raucous left-wing blog.

But the process has also produced maybe the best, most citizen-oriented public disclosure and open government laws in the nation, legalized marijuana and same-sex marriage and prevented a state income tax of any kind from ever being imposed on the people (the last attempt to float one in 2010 went down in flames with over 65 percent of the voters opposing it).

May I see the hands of Save Jerseyans who would like to see the Legislature have a two-thirds rule imposed upon it AND see the state income tax eliminated? One hand only, please – one hand only.

Either way on ballot measures, when the people have the final say, residual political angst is kept to a minimum, which is a healthy thing for the body politic. 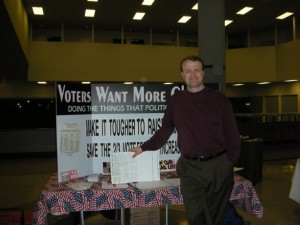 Washington’s two-thirds rule has an over 20 year on-and-off history. Initiatives imposing it or other tax-limitation measures were on the ballot and approved by voters in 1993, 1998, 2007, 2010 and 2012, with Eyman sponsoring the last three. Under Washington law, the Legislature can’t tinker with a voter-approved initiative for the first two years it’s in effect without a two-thirds vote to do so. After two years, however, a simple majority suffices. Given the Legislature’s insatiable hunger for money, the instant the two years was up, the two-thirds requirement would get suspended.

(For a comprehensive list as of 2012 of tax-cut, tax-reduction or spending-limitation ballot measures in Washington state going back to 1932 go here. There are over FIVE DOZEN of them).

Every two years would find Tim and his merry band of bad boys and girls out on the hustings in supermarket and shopping mall parking lots, corralling Seahawks and Mariners fans on their way into games, on busy intersections in downtown Seattle, Spokane, Bellevue, Vancouver and other cities and going door-to-door collecting signatures.

In two instances, voters approved by almost two-thirds of the votes cast measures to require a two-thirds vote of the Legislature to hike taxes.  This is what democracy looks like!

Given that 2012 was a presidential-election year and Washington state voters broke for President Obama 55.8 percent versus 41.7 percent over challenger Mitt Romney, it’s obvious that Tim’s two-thirds rule had broad, bi-partisan support. Democrats may not say so, but when it comes to marking a ballot to cut their own taxes plenty of them climb on board that magic bus.

Save Jerseyans, we should be so lucky to have such an opportunity. So…what are we waiting for?